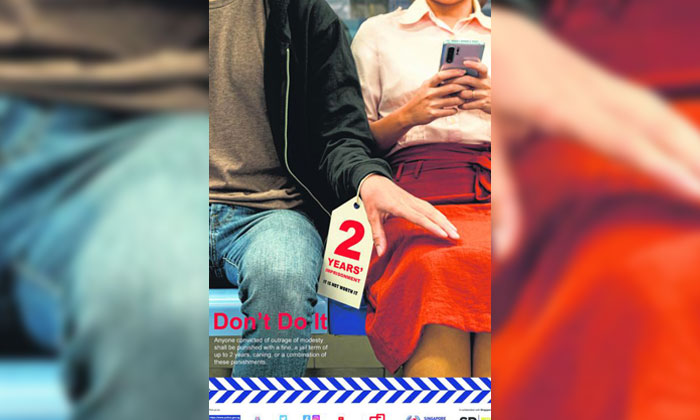 She was raped by an acquaintance three years ago. And when she saw the new anti-molestation posters on the MRT, she felt disturbed.

"The phrase 'It's not worth it' just doesn't make sense to me because no crime is worth it, be it a sexual offence or other offences like theft," the 27-year-old meditation teacher told The New Paper.

On Nov 14, the Association of Women for Action and Research (Aware) had expressed concerns about the two posters, which were produced in collaboration with the National Crime Prevention Council (NCPC) and Singapore Polytechnic's Media, Arts and Design School.

Both posters depicted a man about to molest a woman with a tag on his wrist with the words "2 years' imprisonment. It's not worth it."

The phrase "Don't do it" was also on the poster.

Aware said on its Facebook that the posters put a price on sexual violence and neglected to mention the harm suffered by victims.

But the police defended the posters, which are part of a series featuring other crimes such as theft and rioting, saying that they were meant to specifically highlight the punishments for committing the crimes to send a strong deterrent message.

The NCPC also felt the message would be more impactful if it highlighted the personal costs to the perpetrator.

While the meditation teacher understood what the posters were trying to do, she suggested the words "Don't do it" should be changed to "Why do it?".

This, she said, would encourage perpetrators to think about the trauma inflicted on the victim, instead of just being deterred by the penalties.

A victim who had been molested also told TNP she felt that the posters could have been more sensitive.

The 24-year-old said: "It's like asking perpetrators to compare what is worth it and what is not. Does it mean that if they feel it's worth it, there's nothing wrong with their actions?"

While she acknowledged that penalties could be used as a deterrence, she felt it does not have much of an effect in this case.

She said her perpetrator, who had molested her in a lift when she was 16, was let off with just a warning.

"Two years is just the maximum penalty, but in most cases, the offenders get lighter punishments."

But another molestation victim, who was attacked on the train a few years ago, said she understood the objective of the poster.

The 29-year-old said: "It's a very upfront and direct way of sending a message of cause and effect, and it's targeted at the potential offenders.

"Most of them do it on impulse. If by reminding them of the penalties and the crime rates go down, then that's ideal."

Assistant Professor Christopher Cummings from Nanyang Technological University said the negative reaction to the posters is a result of unintended messaging.

He said: "The poster would be effective to would-be offenders, but it's placed in a public area where not only offenders but victims come into contact with it."

He added that companies can do focus groups or consultations with different stakeholders to prevent backlash.