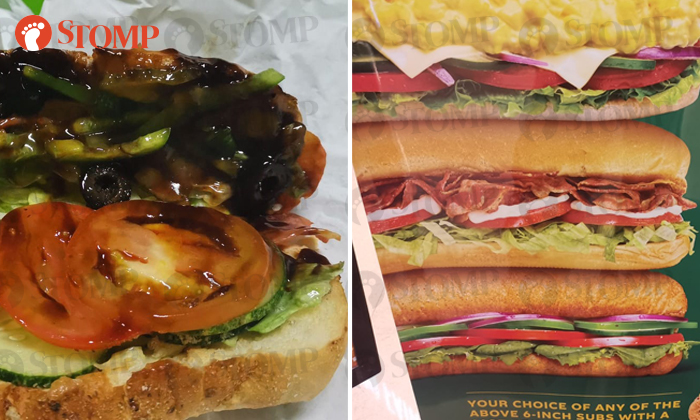 Attracted by how mouth-watering a chicken BLT sandwich looked in its Subway advertisement, Stomper Kenneth decided to try it himself.

However, he was disappointed when he received his order and felt that the actual product paled in comparison to its advertisement.

Kenneth had purchased the bacon, lettuce and tomato (BLT) sub as part of a meal at Subway's Zhongshan Mall outlet last Thursday (Oct 3), at around 8.45pm.

He said: "Subway, where is my BLT?

"It looked so good in the poster's picture, but I only got two miserable and thin chicken bacon strips that I could hardly find in my sub.

"I took two bites and couldn't even taste the meat.

"I asked the staff about the possibility of being given the wrong sandwich, but they said it was the correct one." 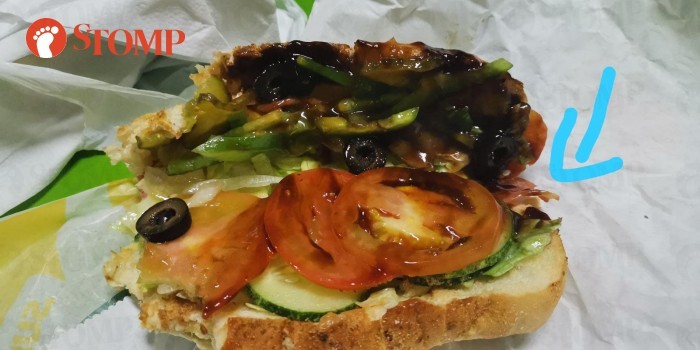 In response to a Stomp query, a spokesman for Subway Singapore said that all its subs are handcrafted, which may therefore result in a disparity from the restaurant chain's promotional materials.

The spokesman told Stomp in a statement: "Subway Singapore understands that one of our customers had a disappointing experience at our Zhongshan Mall restaurant. We learned from his feedback that the Chicken BLT sub he ordered did not match the appearance on the advertisement.

"However, we would like to assure all our customers that all our subs are made according to a standardised recipe worldwide."

The spokesman also ensured that all customer feedback is communicated to Subway's sandwich artists "to further improve our preparation processes".

Related Stories
Woman orders $75 fruit basket for funeral -- but it's far cry from pic advertised on store's website
Fan sorely disappointed by how Domo dish looks like in reality compared to menu
Stall owner responds to incident of woman getting chicken drumstick instead of duck drumstick
More About:
food
expectations vs reality
restaurant
ad
advertisement