Police defend anti-molestation posters after criticism: 'Aware doesn't seem to have understood the purpose of the posters' 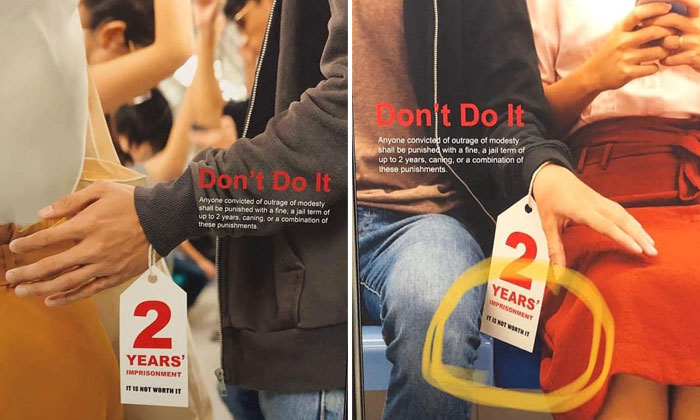 The police have issued a statement to defend a series of crime prevention posters warning against outrage of modesty that have been called out for being insensitive to molest victims.

The Association of Women for the Action and Research (Aware) posted two photos of the posters that were displayed at MRT stations on its Facebook page on Nov 14.

One of the posters shows the hand of man apparently about to molest a woman on a train. Attached to his wrist is a tag with the words: "2 years' imprisonment: It is not worth it."

Aware criticised the photos and said: "What about the price that she will have to pay in this scenario, which the poster makes no mention of?

"Why are we putting a price on sexual violence at all, like it's a commodity to purchase and consume?

"Would one year's imprisonment be "worth it"?

"What is inflicting harm and trauma upon another human being worth?

"We desperately need a shift in the way we talk about and frame sexual violence."

In a statement released on Saturday night (Nov 16), a police spokesman said that Aware may have misunderstood the purpose of the posters.

"These posters are part of crime prevention visuals that the Police have produced in collaboration with the National Crime Prevention Council (NCPC) and Singapore Polytechnic’s (SP) Media, Arts & Design School.

"Other crimes such as shop theft and dishonest misappropriation of property are also featured in these visuals. 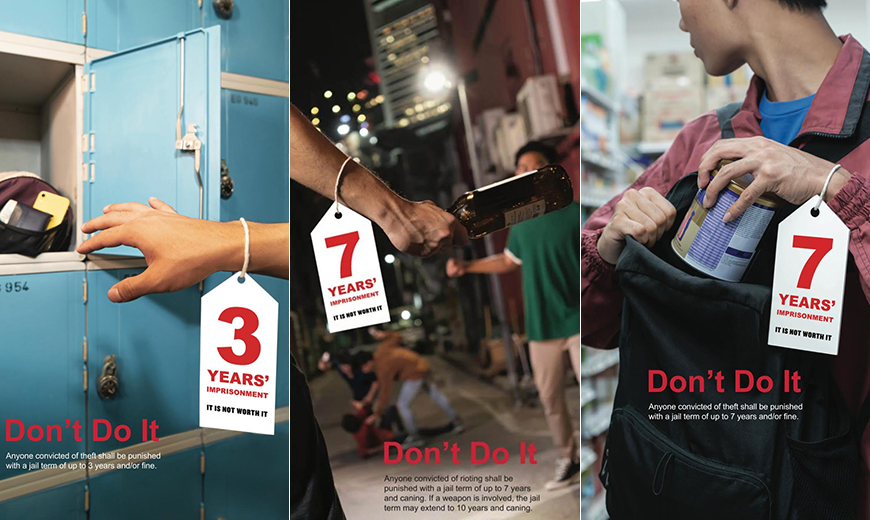 "These visuals target potential perpetrators, and specifically highlight the punishments for committing the criminal acts, in order to send a strong deterrent message.

"Aware has criticised the posters, on the basis that they focus on the punishment, and do not refer to the harm suffered by the victim.

"Aware does not seem to have understood the purpose of the posters.

"The posters are designed to warn would-be offenders, who are unable to exercise self-discipline or control themselves, regardless of their knowledge of the harm that their act will cause to the victim.

"The visuals were designed to influence their behaviour, by telling them what punishment they will face.

"Aware's suggestion, on the other hand, is unlikely to have the intended deterrent effect on such offenders.

"The police fully acknowledge that outrage of modesty victims suffer from trauma and other consequences.

"Indeed, and for this reason, the objective of these visuals is to prevent such harmful actions in the first place, by driving home the point that outrage of modesty is an egregious offence with serious penalties.

"Hence, our crime prevention messages are carefully curated, based on our understanding of the profile of offenders.

"It is unfortunate that Aware has chosen to make these public judgements against the police without any attempt to contact us to understand our perspective, despite having worked with us in the past to enhance support to victims of sexual offences."

Chairman of the NCPC Gerald Singham said that the council was mindful of the hurt that victims of crime, especially sexual crime, suffer from.

"It was never our intention to downplay this," he said.

"However, different messages are carried via different platforms and in this instance, we feel that crime prevention messages would be more impactful if it highlighted the personal costs to the perpetrator.

"In crime prevention, we seek pragmatic, effective solutions to keep our community safe."

An SP spokesman responded to Aware's post as well:

"Singapore Polytechnic (SP) partnered with the Singapore Police Force (SPF) in a collaboration to revamp their crime prevention visuals, which covered a broad range of crimes such as theft and outrage of modesty.

"A brief was given to students of SP’s Media, Arts & Design School who were tasked to develop the visuals.

"Following the brief, the students came up with several concepts including one which had criminal sentences attached to selected crimes.

"The thought behind it is that this would capture the attention of potential offenders and remind them of the severe consequences of such crimes.

"This concept was eventually selected by SPF for the latest campaign."