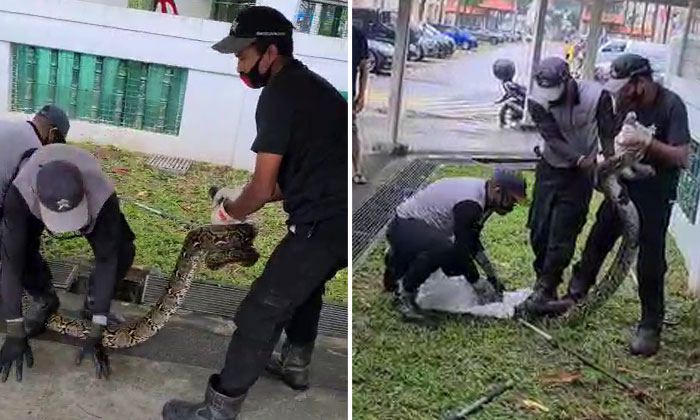 The Animal Concerns Research and Education Society (Acres) has slammed the handling and treatment of a python by a local pest control company, calling it "horrific".

Several Stompers alerted Stomp to a video circulating on social media of workers struggling to catch a python that was lying in a drain.

It is unclear when the incident happened but according to some posts, the location is next to a temple near Block 457 Jurong West Street 41.

In response to a Stomp query, Mr Kalai Vanan, deputy chief executive officer of Acres said: "This is yet another case of horrific handling and treatment of a snake by a pest control company.

"In the video, you can see the total disregard for animal welfare as the animal is stepped on with full weight and tugged aggressively.

"In recent times, Singapore has been moving towards a City In A Garden where one of NParks focus areas is to green up urban spaces, which attracts wildlife inevitably.

"How are we as a community going to adapt to these changes if every time a reptile is sighted, we allow companies whose sole purpose is to kill pests to handle protected wild animals?

"Will any of us tolerate if this happened to other protected animals like otters and macaques or is it that improper handling of reptiles can be tolerated as they aren't seen as being cute?

"The Wildlife Act treats all protected wildlife equally, so should be the enforcement action.

"Sadly, many cases of abusing snakes or monitor lizards have often resulted only in issue of advisory.

"We sincerely hope that this changes for better deterrence.

"As Singapore evolves into a biophillic city, there is a pressing need for us to treat animals in our community with compassion.

"It is alarming that without video evidence, many such cases do not surface, making regulation of the industry more complex than it is.

"If you see a wild animal that is in distress or needs relocation, please call ACRES at 97837782 or NParks."

Similarly, Sankar Ananthanarayanan, co-founder and president of the Herpetological Society of Singapore (HSS) agreed that pest control companies should not be called in to remove pythons from urban areas.

In a statement to Stomp, he said: "Research has shown that Reticulated pythons in urban Singapore are largely preying on introduced, potentially disease-spreading rats.

"Pythons are not pests.

"They are in fact, biological pest control.

"More importantly, they are native biodiversity (just like otters and pangolins), and are equally protected by the recently amended Wildlife Act.

"So, it is inappropriate that pest control operators have been engaged to remove them from urban areas.

"The video shows improper handling and inadequate preparation by the operators.

"Trained professionals like NParks and ACRES are much better prepared to humanely relocate wildlife, without harming the animal.

"Going forward, we hope there can be more oversight and accountability with respect to the treatment of wildlife.

"Pest control operators must also be empowered to refuse to handle animals that they are inadequately trained for.

"Ultimately, the safety of wildlife and the people around them should be of utmost priority."