Python found with minor injuries in Jurong West: Videos show it being tied and pulled out of fence 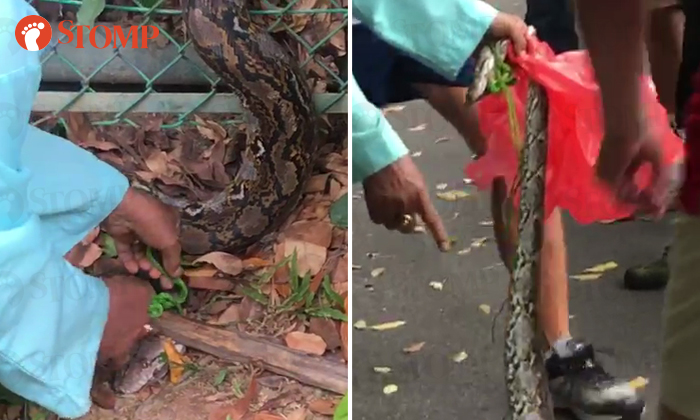 Members of the public discovered a python outside Fuhua Secondary School in Jurong West on Thursday (Apr 24).

Stomper Mani submitted videos showing the snake stuck in a fence along Jurong Park Connector. It can be seen with its head and half of its body outside the fence.

In the videos, someone can be seen stepping on a wooden stick that is on the python's head while another person ties a string around its head, presumably to prevent it from biting.

The reptile is then pulled out of the fence before being placed in a sack.

A wildlife rescue team from the Animal Concerns Research & Education Society (Acres) subsequently retrieved the python at around 6pm.

Mr Kalai Vanan, deputy chief executive officer of Acres, told Stomp: "The Acres wildlife rescue hotline got a call about a python that was being held by a member of public.

"Our team went down to retrieve the snake.

"Unfortunately, the snake had sustained minor injuries but is otherwise fine."

Mr Kalai urged members of the public not to handle wild animals like snakes, and to call Acres' 24-hour hotline at 97837782 or the National Park Boards instead.

He added: "We would like to also remind the public not to crowd around in such circumstances and always maintain social distancing."