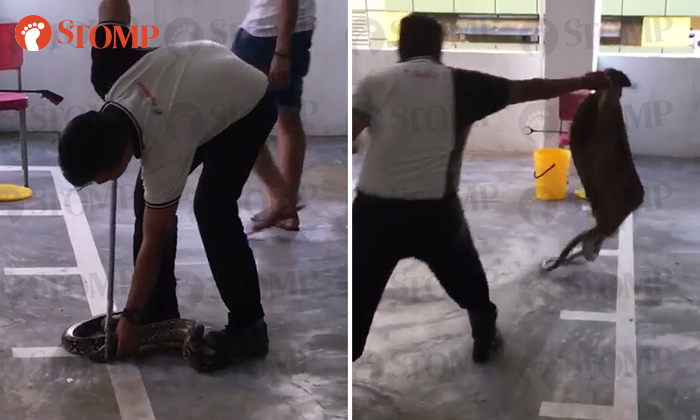 A pest control company is under fire after its employees were caught on video handling a snake in a manner that has been deemed cruel.

Stomper Anonymous sent two video clips of the incident to Stomp and said the "training session" occurred outside the PestBusters office at 22 New Industrial Road.

The first video starts off with a man in a PestBusters shirt flinging a python out of a gunny sack.

Another man, also wearing a similar PestBusters shirt, then approaches the reptile and uses metal tongs to restrain it.

In the second video, he can also been seen stepping on the snake and shoving it with his foot.

He then picks up the snake and throws it on the ground.

Anonymous added: "As you can see, the snake seemed too weak to even defend itself."

When contacted by Stomp, a spokesman for PestBusters said that the video was outdated based on the uniform that the men in the video were wearing.

He did not respond to further queries by press time.

A PestBusters spokesman also told The New Paper that the footage was not filmed at a training session.

He said: "All our training videos are recorded, and this incident was not in our records. There is a specific team in charge of handling snakes, and what is seen in the video is not how we handle snakes. We definitely do not throw the snakes around. It's wrong."

According to the spokesman, the man in the video was a junior staff member at the time of the incident and was not trained to handle snakes.

"The man has now taken up a senior position, and when confronted, he said he has no recollection of the incident," he added.

"We are working with the Agri-Food & Veterinary Authority of Singapore (AVA) to investigate this."

In response to a Stomp query, the AVA said it is investigating the incident.

A spokesman told Stomp: "The AVA has issued a set of guidelines on the proper handling of snakes to all pest control and wildlife management agencies in Singapore.

"For example, snakes should not be unduly harmed by the persons handling it and appropriate equipment should be used to catch them."

In a statement to Stomp, he said: "Handling of wild animals goes beyond just knowing how to handle them. It requires respect, knowledge and compassion which cannot be taught.

"Acres hopes that the relevant authorities can look into this matter and take action as this is a serious case of animal cruelty."

Mr Kalai also questioned the snake's current whereabouts and added: "These wild animals are ours to cherish, protect and co-exist with."

Members of the public who come across a wild animal in need of rescue are advised to call the Acres hotline at 9783 7782.