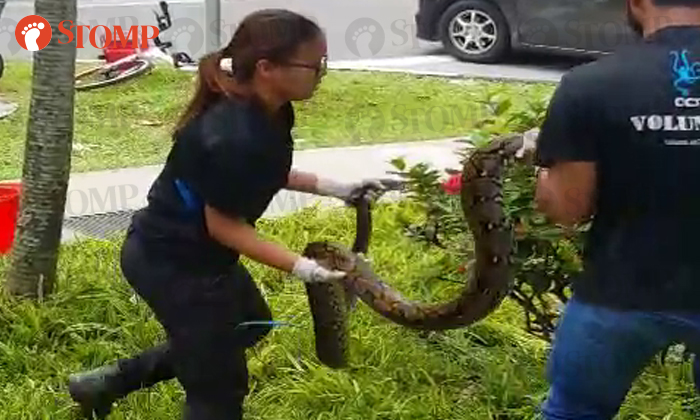 A python was spotted on a grass patch near Block 165 Yishun Ring Road on Saturday afternoon (Nov 3) and subsequently rescued by the Animal Concerns Research and Education Society (Acres).

The reptile was two-and-a-half to three metres long.

Stomper Riana, a resident in the area, contributed photos and a video of the rescue mission which she said occurred at around 12pm.

She told Stomp: "I heard that an uncle who was cleaning the area saw the snake and called people.

"The rescue lasted around 30 minutes as the snake seemed stuck among the grass.

"It was quite long, but I'm not sure how many metres."

Riana also said that it was her first time seeing a snake in her estate.

In response to a Stomp query, Acres' deputy chief executive officer, Mr Kalai Vanan, said that the wildlife rescue hotline received a call about the python on Saturday morning.

He added: "We understand that pest control was also called in to handle the snake. However, Acres took over the case and rescued the python.

"The snake will be micro chipped and subsequently released.

"Snakes are part of our biodiversity and we urge the public to call Acres at 9783 7782 should they sight a snake who might require relocation."

Members of the public can also contact the Agri-Food and Veterinary Authority of Singapore (AVA) at 1800 476 1600.