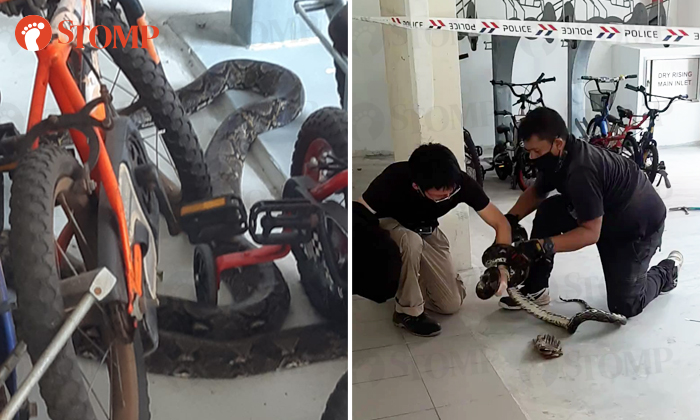 A reticulated python visited the void deck of Block 157 Bishan Street 13 last Thursday (Apr 30), but did not stay long and eventually found its way home.

Stomper CYK shared a video showing officers from the National Parks Board (NParks) handling the reptile. A police cordon can also be seen at the block.

CYK said: "The python was spotted at around 10am and the police were called."

Mr How Choon Beng, Director of Wildlife Management & Outreach at NParks, confirmed that the agency had responded to a call about the reticulated python at the void deck.

"The python was caught and sent to Wildlife Reserves Singapore, where it was assessed for its health before being relocated in a forest," Mr How told Stomp.

"The reticulated python is occasionally encountered in urban areas and is native to Singapore.

"Pythons play an important role in regulating the ecosystem by naturally keeping numbers of pests, such as rodents, low."