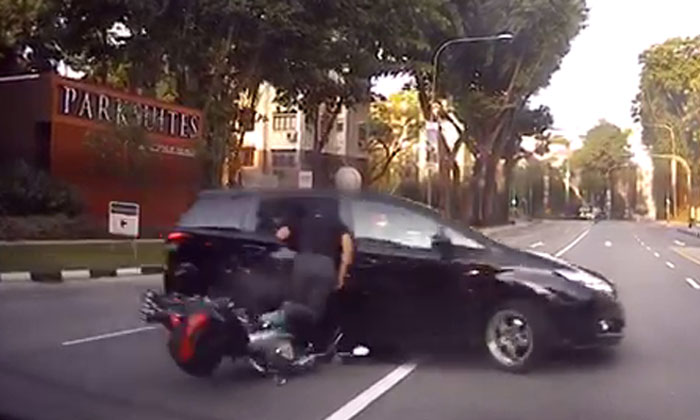 A motorcyclist was taken to hospital after crashing head-on into a Toyota car that had made an illegal U-turn along River Valley Road on Friday evening (Sep 14).

Stompers Helmi and Jayden alerted Stomp to the circulated video that was also posted in SG Road Vigilante's Facebook group.

In the video, the driver of a black Toyota Wish is seen making a U-turn from the leftmost lane to change direction.

His sudden action leaves no time for the oncoming motorcyclist to react and causes him to crash into the right passenger side of the car.

His helmet-covered head is seen smashing through the passenger-side window, breaking the glass.

The rider then rolls onto the road clutching at his head.

The driver of the car exits his vehicle to offer assistance to the rider before the video ends.

In response to a Stomp media query, a Singapore Civil Defence Force (SCDF) spokesman said that they were alerted to a road traffic accident at 299 River Valley Road at about 6.05pm.

"A man was conveyed to Singapore General Hospital (SGH)," the spokesman said.

The police provided the following statement to Stomp:

"On Sep 14 at 6.06pm, the police were alerted to an accident involving a car and a motorcycle along River Valley Road towards Hill Street.

"The motorcyclist was conscious when conveyed to SGH.