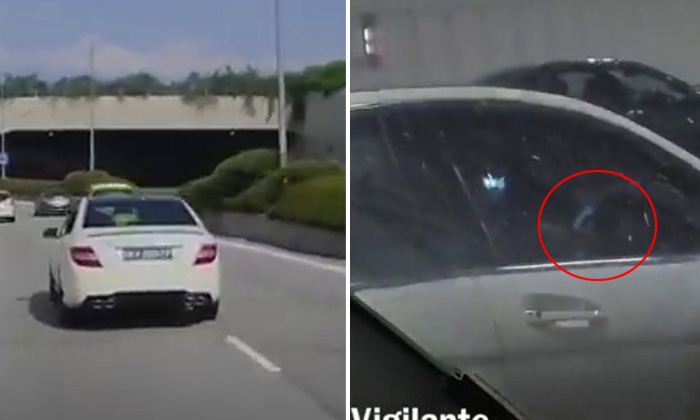 A driver was caught on video holding his phone with one hand while driving along Marina Coastal Expressway yesterday (Sep 17).

The video, shot via the dashboard camera of another car and uploaded on Facebook page SG Road Vigilante - SGRV, shows a driver failing to keep his car in the centre of the lane.

As the video drew closer to the side of the Mercedes, the driver can be seen with one hand on the steering wheel and the other on his phone.

The lit screen of the phone is clearly visible in the video.

"When you see a vehicle that can't keep to its lane," said the caption on the Facebook video.

"What could possibly be the reason?

"Other law abiding motorists and especially bikers will normally be the victim if accidents were to occur due to the lack of concentration from these selfish drivers."

According to the Singapore Police Force website, using a mobile communication device (MCD) while driving is an offence.

In order for the offence to stand, there are three requirements to be met:

(a) the vehicle is in motion; and

(b) the driver is holding on to any MCD with one hand; and

(c) the driver using any function of the MCD.

Drivers are advised to make use of hands-free sets to answer calls while driving.

According to the Facebook post, an e-feedback to the Traffic Police has been lodged with regards to this incident.

Related Stories
Hello, auntie... your favourite drama can't be more important than your life
Cabby swipes mobile device to read novel -- while driving at 100kmh on expressway
Uncle shows how good he is at multitasking by using phone and driving at the same time
More About:
driving
dangerous
dangerous driving