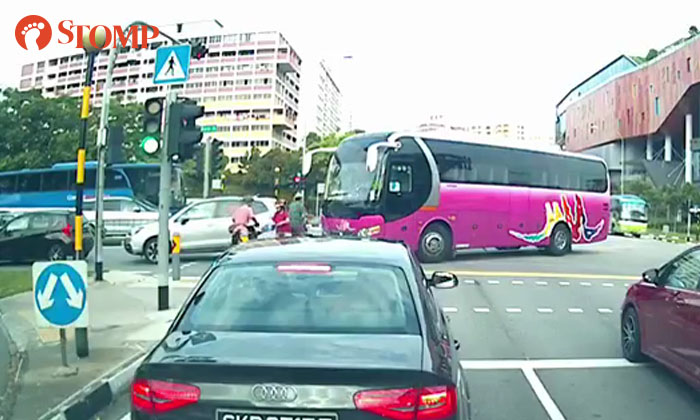 Two buses were caught on video stopping in yellow boxes on Wednesday (Sep 19), 25 minutes apart from each other.

The first incident occurred along Tampines Avenue 4 at 7.59am.

A Stomper had stopped at a traffic junction when he saw it.

In footages from his car dash camera, a purple bus is seen obstructing the way of vehicles going straight, even though the traffic lights are in their favour.

Pedestrians crossing are also seen being left with only a cramped space in between the bus and a car, some even having to stop to give way so as to allow space for one another to pass through.

The bus only moved off after the traffic lights turned red again.

The Stomper said: "Our side had no chance to cross at all, despite the lights turning green.

"The bus wasn't only blocking the way of vehicles but it also made it difficult for pedestrians to cross as well."

However, that was not the end of the Stomper's frustration.

He was driving along Pasir Ris Street 52 at 8.25am on the same day when the saga continued.

In the video, an SBS Transit bus is seen blocking the Stomper's view of a motorcyclist who was turning out from behind it.

"Within 25 minutes, I encountered another bus stopping in a yellow box and blocking the traffic," he said.

"It almost caused a rider to get into an accident."

Under the Road Traffic Act, it is an offence to drive or ride, or turn a vehicle or part thereof into a yellow box of a road junction.

Related Stories
Rider taken to hospital after crashing head-on into Toyota that made illegal U-turn across 5 lanes
Taxi speeds and cuts across lane at Ang Mo Kio to reach woman standing by roadside
Driver of lorry GZ3253Y hurtles over road divider -- and nearly crashes into car
More About:
dangerous driving
Bus
inconsiderate