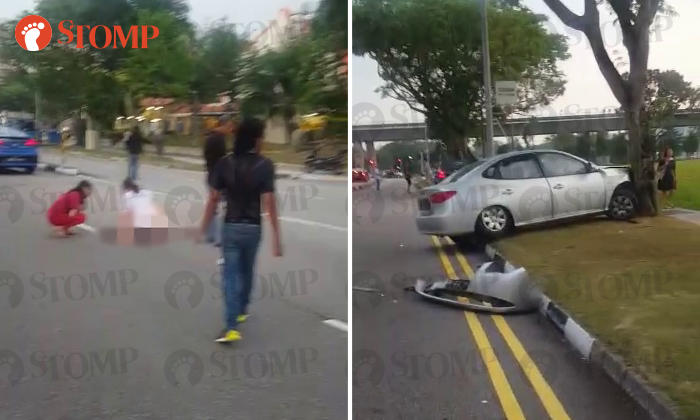 A new video shows how a car had crashed through a carpark gantry and sparked the fatal accident.

An 83-year-old female pedestrian died after an accident involving three cars and a motorcycle along Jurong East Street 31 on Tuesday (March 5).

In response to a Stomp query, the police said they were alerted to the accident, which occurred in front of Block 352, at 6.58pm.

The motorcyclist as well as two of the car drivers, aged between 34 and 72, were conscious when taken to hospital.

The pedestrian was unconscious when conveyed to Ng Teng Fong General Hospital, where she subsequently succumbed to her injuries.

Several Stompers alerted Stomp to a video of the accident scene that has been circulating online.

In the video, an elderly woman can be seen lying in the middle of two lanes on the road while a man lies on a grass patch nearby.

Two cars are seen mounted on the kerb, with one of them appearing to have crashed into a tree.

Stomper Adriel also shared photos of the accident site that he took at night.