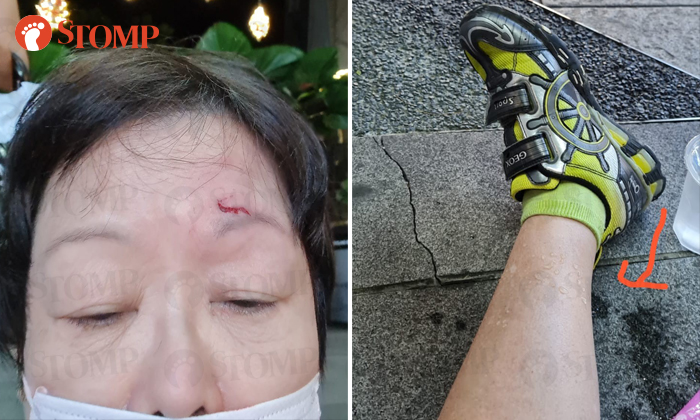 An elderly pedestrian suffered injuries after a fall caused by broken pavement slabs along Orchard Road.

Stomper Lydia, who is 78 years old, said the incident occurred outside Orchard Plaza last Wednesday (Dec 1) at around 8pm.

The retired schoolteacher told Stomp: "I was walking along the pavement and heading towards Centrepoint.

"I tripped on one of the broken pavement slabs and fell flat on my face, cutting my left eyebrow very badly. I bled profusely, staining the pavement.

Lydia shared photos showing a cut above her eyebrow and the pavement with dark stains on it. A few slabs can be seen raised from the pavement.

The Stomper's husband subsequently took her to iCare Medical and Wellness Clinic at Havelock Road, where she required eight stitches.

Lydia added: "I went back to check the pavement later in the evening. I found that there were strips of black and yellow tape pasted near the cracks of the uneven pavement slabs.

"I also went to Orchard Neighbourhood Police Centre along Killiney Road to make a report. I was advised on which authority road pavements fall under.

"On December 2, I filed feedback with the relevant authority.

"On December 5, I went back to check the pavement outside Orchard Plaza and found that nothing else has been done to alert pedestrians of the broken pavement slabs."

Lydia told Stomp on Monday (Dec 6) that she has since recovered and gotten her stitches removed, adding that she hopes cones can be placed at the pavement to alert pedestrians.