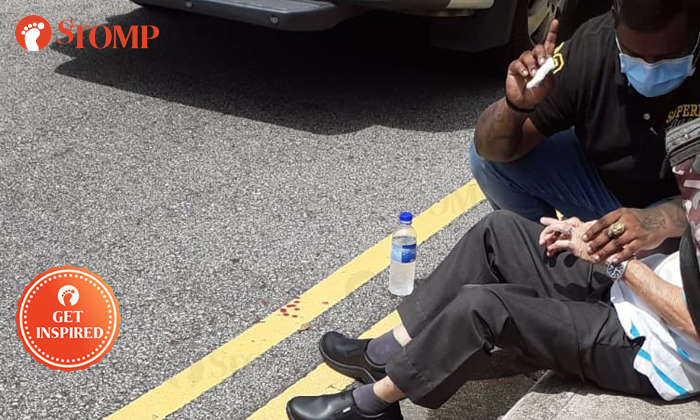 An elderly man was taken to hospital after he tripped and fell while crossing the road in Chinatown on Monday morning (Nov 22).

Stomper Freya witnessed the incident along Upper Cross Street and shared photos showing a Good Samaritan tending to the man.

She said: "An old man was waiting to cross the road and when the light turned green, he tripped and fell. He was bleeding when he got up.

"Another pedestrian behind the elderly man quickly carried him to the roadside as there was heavy traffic.

"The most I could offer the uncle was a pack of tissue paper.

"I saw the pedestrian applying pressure on the uncle's forehead to stop the bleeding. He left after handing things over to the ambulance. His actions made me proud to be a Singaporean.

"The old man is aged 80. I hope he is doing fine. Let's pray for his speedy recovery."

In response to a Stomp query, the Singapore Civil Defence Force (SCDF) said it received a call for assistance at a pedestrian crossing along Upper Cross Street at around 11.30am and conveyed one person to Singapore General Hospital.