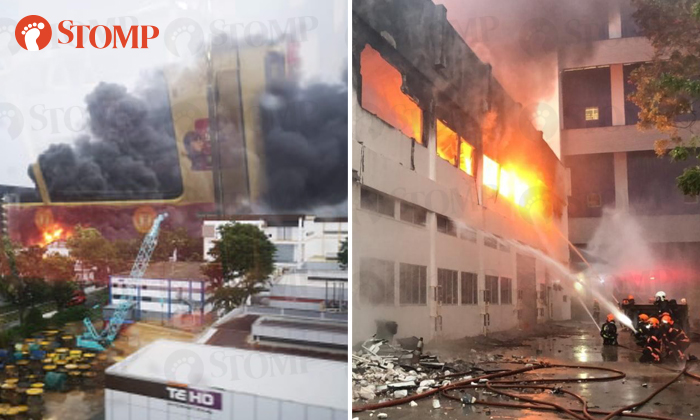 A massive fire broke out at a two-storey warehouse in Tuas on Wednesday morning (May 13).

The Singapore Civil Defence Force said it responded to the blaze at 2B Tuas Avenue 12 at around 6.50am.

The fire, which involved contents of the warehouse largely comprising of machinery and bales of plastic resins, was seen raging from the second floor of the building when firefighters arrived.

In photos and videos that Stomper William shared, a thick cloud of smoke can be seen from the warehouse.

"SCDF immediately deployed its resources to surround and contain the fire," it said in a statement on Facebook.

"Firefighters faced intense heat from the fire, which had caused the walls of the premises to break off.

"A total of 16 emergency vehicles and about 70 firefighters were deployed. At the height of the operations, eight handheld jets were used to mitigate the fire."

The fire was extinguished at about 7.50am. Damping down operations are currently ongoing.

Related Stories
Fire at Changi Village Hawker Centre put out by members of the public with 10 extinguishers
Firefighters inch through rubble of heated metal to put out blaze engulfing Jurong warehouse
Sengkang flat ravaged by fire: Single mum of 3 'at a loss for words' after help and donations pour in
More About:
fire