Sengkang flat ravaged by fire: Single mum of 3 'at a loss for words' after help and donations pour in 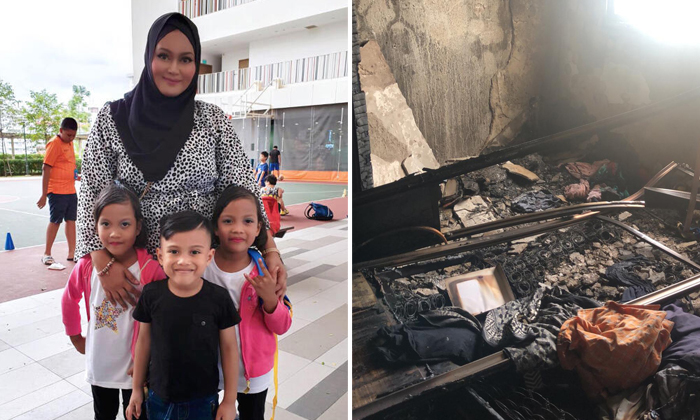 A single mum and her three children will not be able to return home for a few months after a fire ripped through their flat, but the help they are receiving from people hearing of their plight is easing their pain.

Madam Tanti Yani Zaini, 33, told The Straits Times on Tuesday (April 14): "I'm at a loss for words. So many people offered to help, from strangers to neighbours that I had never spoken to before. They treat us like family."

The fire broke out on the evening of Good Friday at the flat in Sengkang West, leaving Madam Tanti worried about where they would live.

But help from the authorities, the town council and her local residents' committee will allow the family of four to move into a one-room rental flat in Jalan Kayu on Tuesday, where they will stay for the next few months.

Offers to help with furniture, clothes and even iPads for the children's home-based learning have also poured in, while cash donations of about $20,000 have been made after her brother's girlfriend posted about the incident on social media.

The money will be used for the family's daily needs, and expenses such as repair work on the flat, said Madam Tanti, who is looking for a job.

The circuit breaker measures mean non-essential construction or repair work is not allowed, but Madam Tanti said the authorities and her insurers are trying to work out how she can get her 10th-floor flat cleaned and restored as soon as possible.

The blaze started in the master bedroom of the three-room flat while she was in the attached bathroom getting ready to take a shower.

Her five-year-old son had been in the master bedroom, while her eight-year-old twin daughters were in the living room with her brother and his girlfriend, who had come by to drop off some groceries.

"I heard my brother shout 'Fire!' and I peeked my head out of the toilet, and that's when I saw this huge fire in the room," said Madam Tanti.

While her brother grabbed her son and his girlfriend led the older girls downstairs to safety, Madam Tanti hurriedly put on some clothes, took her phone and ran out of the burning flat.

"As we stood downstairs, my children asked me where we were going to stay. I honestly didn't know," she said.

But as the crowd gathered below the block and the fire was put out by the Singapore Civil Defence Force, the actions of those around the family touched her, added Madam Tanti, who is divorced.

"Someone bought us dinner and everyone was trying to make sure we were all right," she said, adding that Sengkang West MP Lam Pin Min also came by to check on them.

The family members have been staying with Madam Tanti's brother in Woodlands since the fire.

The Muslim month of Ramadan begins later this month, and while the family will not be spending it in the flat they have called home for the past five years, there is still a lot to be thankful for, said Madam Tanti.

"As long as I have my family with me this Ramadan, no matter if it's in a big or small place, it will always be home."