Cyclist, 64, dies after getting hit by Mercedes-Benz along Tampines Ave 3, driver arrested 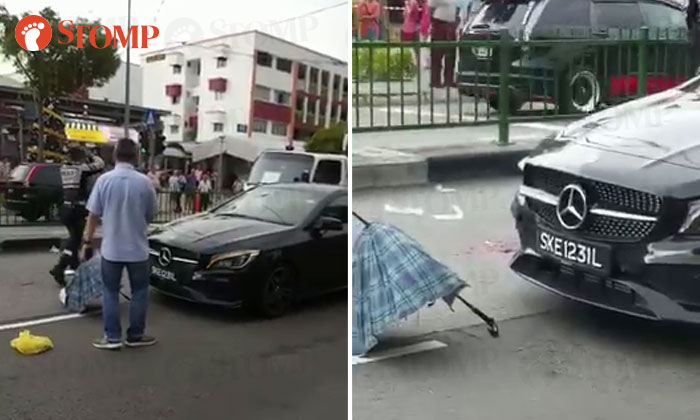 A 64-year-old cyclist died after he was hit by a Mercedes-Benz along Tampines Avenue 3 on Thursday morning (Nov 21).

The Merc driver was subsequently arrested.

Stomper Sha alerted Stomp to the incident and shared a video and photos taken at the scene.

In the footage, a broken umbrella is seen lying on the road in front of the black Merc as well as several sheets of paper. A bloodstain is near the car as well.

"Blood could be seen under the front right tyre of the Mercedes and there was more beside it," said the Stomper.

"Traffic Police were blocking the road."

In response to a Stomp query, the police said they were alerted to the accident at about 8.13am.

"The cyclist, a 64-year-old man, was unconscious when conveyed to Changi General Hospital," a police spokesman said.

"He subsequently succumbed to his injuries on his way to the hospital.

"The driver, a 47-year-old man, was arrested in relation to the case."