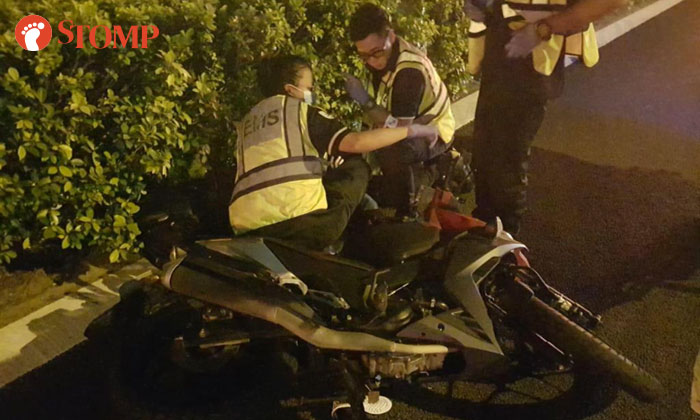 The family of a rider are appealing for witnesses after he was involved in a hit-and-run accident along the Tampines Expressway (TPE), near IKEA Tampines on Nov 11.

The rider's wife told Stomp that her husband was on his way home when a white car hit him on his left side.

"He swerved into my husband's lane and dragged him to the first lane," she said,

"We appreciate any information," he said.

In response to a Stomp query, the police said they were alerted to a hit-and-run accident involving a car and a motorcycle along the TPE towards the Seletar Expressway (SLE).

The motorcyclist, a 29-year-old man, was conscious when taken to Sengkang General Hospital, a police spokesman said.

If you have any information or footage of the incident, kindly contact Stomp at stomp@stomp.com.sg or WhatsApp 9384 3761.

Related Stories
Man appealing for witnesses after car left with $350 worth of damages in hit-and-run at Jurong carpark
7 cars involved in hit-and-run accident along Pasir Ris Drive 3
Car rolls away and hits vehicle in carpark after youth fails to put it in parking gear
More About:
accident
hit-and-run
appeal for witnesses