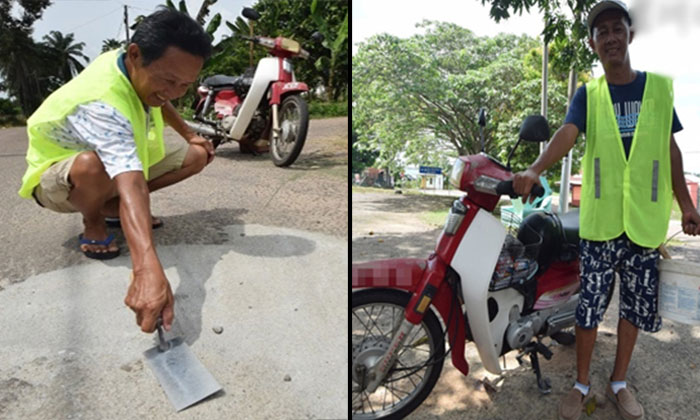 A 57-year-old Malaysian man, Wong recently rose to fame after it was discovered that the retiree had been patrolling his village in the town of Paloh, Johor and quietly patching up potholes for over a year.

Even more impressive, the man had forked out all expenses from his own pockets, without any form of reimbursements.

To date, the man has allegedly patched up hundreds of potholes reports  Sinchew via The World of Buzz.

Apparently, Wong was working in Kuala Lumpur three years ago, but decided to retire for health-related reasons.

“The doctor said my arteries were blocked.

“So, I decided to stay at home and rest for half a year.”

However, Wong soon got restless, and decided to venture out.

While he was out on his motorcycle back in 2015, it suddenly dawned on him that he could patch up the potholes and sweep the sand off roads to prevent accidents and kill time all at once, while giving back to the society.

Despite having no experience in the field, the earnest man quickly picked up the proper technique of mixing cement from some friends in the construction field:

“Every evening, I would patrol the village on motorcycle and take note of every potholes I encountered so that I can come back the next day to repair them.”

Wong had to make several trips a day, due to the constraints of his motorcycle.

He would start his routine every day at 9am.

According to him, the cement harden the fastest under the scorching sun.

Wong would buy the cement with his money, and collect sand from residents who were renovating their houses.

Wong said that he could not have done everything without help from friends and family:

“The city council contributed sand and cement before while my friend lent me the storeroom in his coffee shop as a storage space for my equipment.

“The coffee shop is also where I gather my ‘intelligence’ regarding the location of the potholes.”

Aside from patching up potholes, Wong also volunteers in an old folks home occasionally.

Related Stories
Republic Poly lecturer who danced in bunny suit moved to tears after getting a surprise of her own
Auntie asking for permission to put up altar in Pasir Ris when she didn't need to shows what racial harmony means
Woman's 'His Love vs My Cancer' story will make you cry buckets: "I really thought I was going to die"
inspiring
Malaysia
potholes
retiree