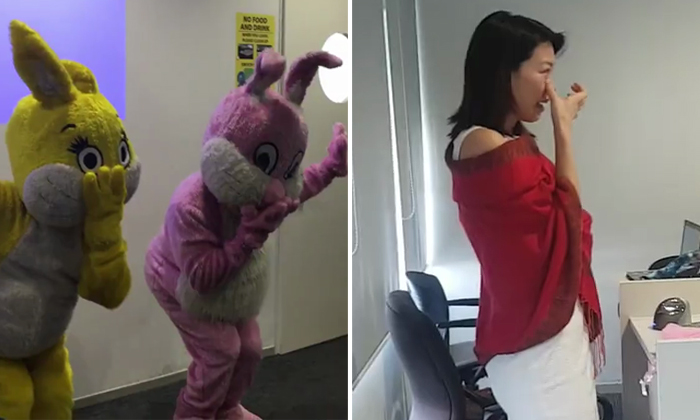 A Republic Polytechnic lecturer who previously sprung a hip-hop performance on her students recently received a surprise of her own too.

On Jan 17, Ms Teeny Teh and her husband had shown up to a class dressed in rabbit costumes, much to the amusement of the audience.

The duo's performance of 2NE1's "I AM THE BEST" was captured in a video that was subsequently posted on Facebook by Joey Jason.

Stomper Jasmine alerted Stomp to a new video of Ms Teh now being on the receiving end of a prank, posted by Facebook user Lin Lin Inuu on Feb 10.

The post said, "It's the last lesson with our awesome lecturer, Ms Teeny Teh, and to appreciate all the effort she has constantly put into our classes, we decided to surprise her.

"We tricked her into thinking that only five students made it on time for lesson while the others were late. Little did she know that the entire class has put up a special performance just for her!"

The funny yet touching clip shows the class breaking out into High School musical hit We're All In This Together, with Ms Teh being moved to tears.