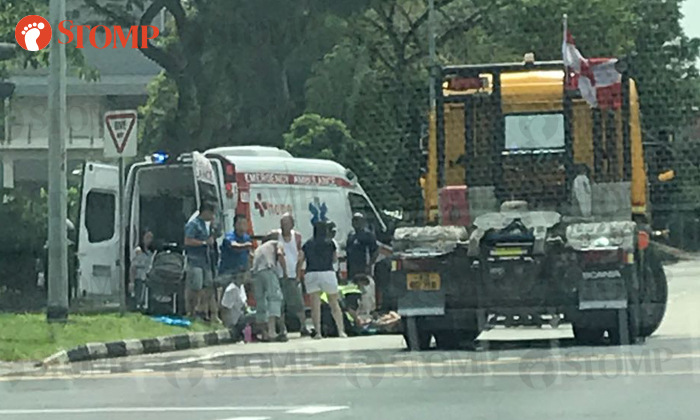 The woman had been crossing the road when she was hit by the car.

In response to media queries by Stomp, the police said they were alerted to the accident at the junction of Woodlands Avenue 1 and 2 at 12.50pm.

The victim was unconscious when she was sent to Khoo Teck Puat Hospital, where she subsequently succumbed to her injuries.

Stomper AJ, who passed by the scene, said there was a traffic jam due to the accident.

According to her, a truck driver was helping to direct traffic flow.

She also saw the car that was involved in the accident parked at one side.

"There was a lot of blood," added AJ.

Lianhe Zaobao reported that someone was heard crying at the scene.

A woman at the scene, who identified herself as the owner of the car, declined to comment.

Related Stories
Pedestrian, 67, killed in West Coast Drive accident: Family initially unable to identify her body
84-year-old pedestrian dies after being hit by car at Chua Chu Kang
53-year-old woman killed after being run over and pinned underneath van at Victoria Street
75-year-old man dies in hospital after getting hit by car while crossing road in Tampines
More About:
accident
fatal accident
pedestrian killed
pedestrian