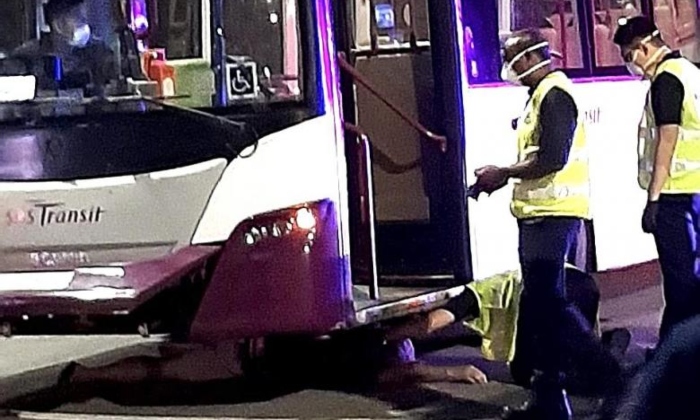 A 52-year-old man was trapped under a bus on Wednesday night after a collision.

The police said they were alerted to the accident at about 10.45pm at the junction of Toa Payoh Lorong 6 and Toa Payoh East.

The man was taken to Tan Tock Seng Hospital, and the bus driver, 36, was arrested for dangerous driving causing grievous hurt.

Chinese-language newspaper Shin Min Daily News said the man was trapped for about 15 minutes before he was rescued by Singapore Civil Defence Force officers.

Eyewitnesses said the victim was crossing the road with a shopping trolley and the bus was turning right when the accident happened.

A motorcyclist, 30, said he was on his motorcycle when he heard the collision.

It did not occur to him that an accident had happened and he realised someone was trapped only after he saw the bus driver alighting to check.

He said: "The man looked like he was in pain. He was freed after 15 minutes and taken to the hospital at about 11pm."

Chinese-language newspaper Lianhe Wanbao reported that the front of the bus was damaged, and debris had littered the road. Tyre brake marks could also be seen.

The accident drew a crowd of onlookers and Wanbao also reported that the victim's body was trapped under the front of the bus.

He looked pale when he was pulled out, and a bystander said the man had injuries on his hands and feet and they looked serious.

Senior vice-president of corporate communications at SBS Transit Tammy Tan said the company has been trying to get in touch with the pedestrian.

She said: "We have left our contact details with the hospital and hope the gentleman or his family members are able to get in touch with us so we can assist them as he recuperates. We are deeply sorry for the accident and are assisting the police in its investigations."