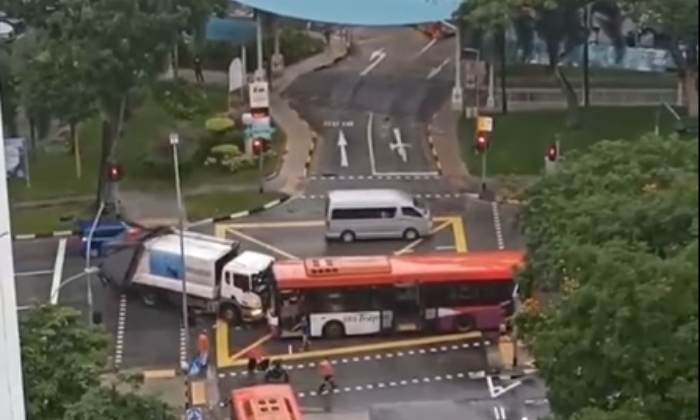 Ms Tammy Tan, Senior Vice President of Corporate Communications at SBS Transit, said: "On Monday (Oct 26), one of our buses was involved in an accident with a truck at the junction of Chai Chee Road and Chai Chee Street.

"We are in touch with the injured passengers who were conveyed to the hospital for outpatient treatment. We are grateful that none of them sustained serious injuries and were discharged that same day.

"We also wish to apologise to affected commuters and fellow road users for the inconvenience caused."

A 33-year-old male bus driver and five bus passengers were taken to hospital after a head-on collision involving an SBS Transit bus and a truck at the junction of Chai Chee Road and Chai Chee Street on Monday (Oct 26).

A Stomper came across a circulated photo of the accident and shared it with Stomp.

The aftermath of the accident was also caught on video and it was posted on the Singapore Bus Drivers Community Facebook page.

In the video, both vehicles seem to have been going on opposing directions before crashing into each other.

The bus appears to be going straight while the truck seems to have wanted to make a right turn.

A man standing beside the bus can also be seen directing traffic as two white cars weave through the accident scene.

In response to a Stomp query, the police said they were alerted to the accident at 7.33am.

"The 33-year-old male bus driver and the five bus passengers, aged between 43 and 65, were conscious when conveyed to Changi General Hospital," added the police spokesman.