Food deliveryman, 41, taken to hospital after pedestrian pushes him off bicycle in Yishun 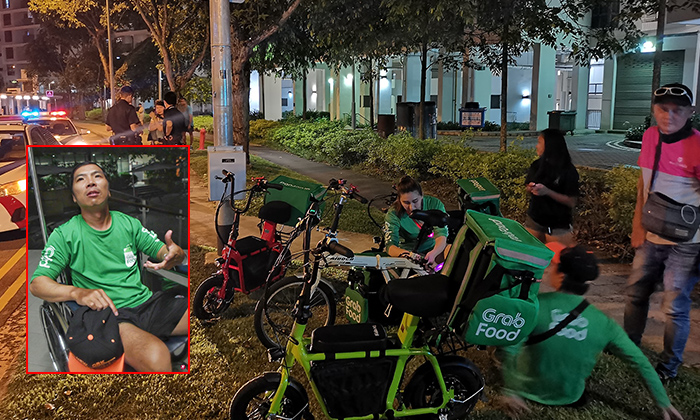 A 41-year-old food deliveryman was taken to hospital after he was allegedly pushed by a man who refused to make way on Wednesday night (Nov 6) at Block 348C Yishun Avenue 11.

This incident was also shared in a post on Facebook page SG Road Vigilante on Nov 6. The post has since garnered over 2,800 shares and more than 600 comments.

Lin Rong Wei said he was accompanying his wife who also does food deliveries on her electric bike.

On the night of the incident, Lin's wife was unsure about the delivery location, so he decided to go with her. Lin was still in his uniform and had his delivery bag with him.

Lin said to Shin Min Daily News: "At the time, I was cycling my bicycle and my wife was riding her electric bike. We left from Northpoint City and was reaching the stretch of Block 400s in Yishun."

Lin saw a couple in front of them while they were cycling on a bicycle path along Yishun Avenue 11, so he started shouting at them to make way.

Even after shouting for about five minutes, the couple still did not bother to make way.

Lin added that he saw some space between the couple, said "excuse me", wanting the couple to make way for him to cycle through.

However, the man aggressively hit Lin's delivery bag, causing him to lose balance and thus falling onto a grass patch beside the path.

Lin said that while he was trying to get up, the man pushed him onto the ground again. Lin's wife immediately notified the police.

"The man even shouted at me: 'Scooters are now banned, you cannot ride your bicycles here and earn what livelihood.'"

In response to a Stomp query, the police said: "At 8.10pm on Nov 6, the police were alerted to a case of voluntarily causing hurt involving two pedestrians and a cyclist along the bicycle path near Block 348C Yishun Avenue 11.

"The cyclist, a 41-year-old man, was conveyed conscious to Khoo Teck Puat Hospital.