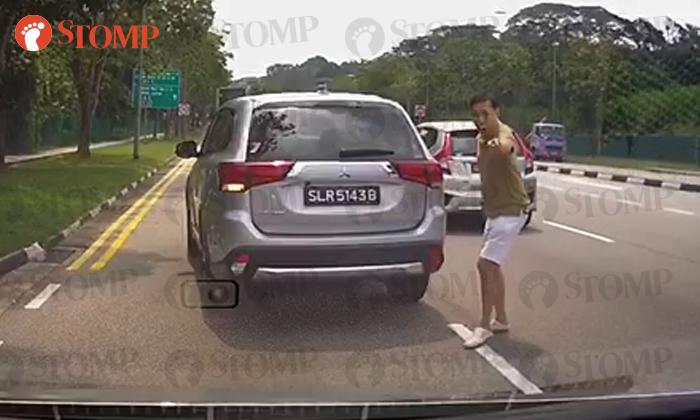 Police are investigating an incident where a driver spat on Stomper CK's car during an expletive-laden shouting match along Bukit Batok Road on Saturday afternoon (Nov 2).

CK said that the Mitsubishi driver also spat on his car during the dispute, which occurred at around 1.40pm and was captured on his dashboard camera.

The road rage dispute took place after CK honked at the driver multiple times for repeatedly trying to cut into his lane.

CK recounted: "As shown in the video, this guy tried to cut into my lane, not just slightly but his whole car. On both occasions, I honked at him to warn him and he was not happy.

"He then cut in front of me and jammed on his brakes."

In the video, both drivers can be seen stopping by the roadside and having a confrontation.

The Stomper can be heard shouting, "Do you know how to drive?" and berating the other party for cutting into his lane.

"After that, because I realised he was a reckless driver who just wanted to endanger the lives of other road users, I sped off in an attempt to avoid him and prevent him from cutting in front of me and playing the jam-braking game.

"However, he stopped me with his car and body. He also spat on my car and body, and touched me while hurling vulgarities."

In the video, CK can be heard saying, "Can you go away?" while the driver continued yelling at him.

CK lodged a police report on the same day.

In the police report that was seen by Stomp, CK described feeling "very frightened and intimidated" by the incident.

Responding to a Stomp query, the police confirmed that a report was lodged and investigations are ongoing.

Related Stories
Stomper gets into shouting match with driver who made late signal to change lane at Queensway
Man rages at driver and boxes his car in after causing collision
Lorry driver brandishes wooden plank after allegedly challenging man to a fight in Tampines
More About:
road rage
dispute
vulgar