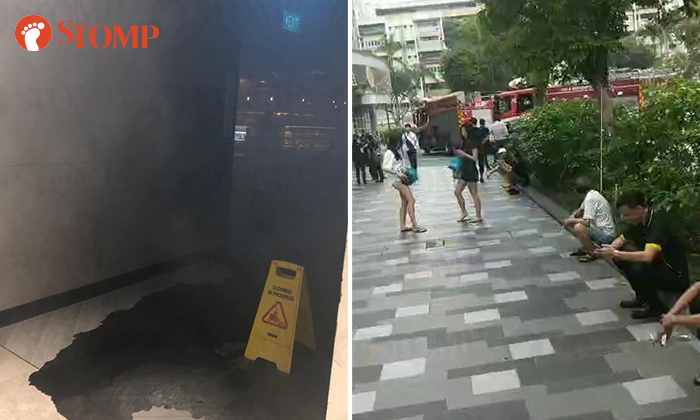 4,000 people were evacuated from Century Square after a fire involving a floor cleaning machine broke out in the building at about 4.15pm on Tuesday (Nov 5).

Stompers Elizabeth and Ken alerted Stomp to the fire and contributed photos and videos they took at the scene.

Elizabeth told Stomp: "I was coming up from the carpark in Century Square and had just entered at about 4pm.

"I was near Eu Yan Sang and heard an explosion. It sounded like something had dropped and a gym was nearby so I thought someone in the gym had dropped some weights.

"I then saw some people running out from the direction of the food court as they said: 'Fire, fire.'

"I felt inquisitive and went towards that direction. That's when I saw some black water on the ground, so I took a photo.

"There was a lot of smoke and the fire preventive doors were coming down. This shows that they're very efficient.

"After the mall announced the fire, my daughter and I went to a neighbouring building but I remembered that my car was parked below the mall.

"We went to the car and I drove off at about 5pm."

Responding to a Stomp query, the Singapore Civil Defence Force (SCDF) said: "At about 4.15pm on Tuesday (Nov 5), SCDF responded to a fire incident at 2 Tampines Central 5.

"The fire, which involved a floor cleaning machine on the third floor, was extinguished by the sprinklers before the arrival of SCDF.

"An elderly man was assessed by an SCDF paramedic for giddiness but he subsequently refused conveyance to hospital.

"About 4,000 shoppers and staff from the building were evacuated as a precautionary measure.

"The cause of the fire is under investigation.