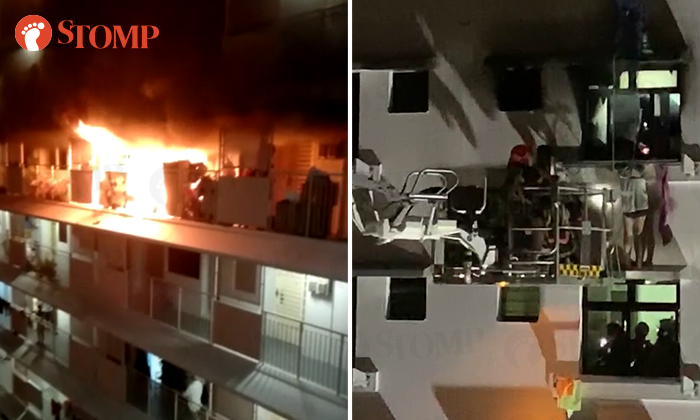 Two men were rescued from a window ledge of a 13th-floor unit at Block 210A Bukit Batok Street 21 after a fire broke out in the flat on Friday morning (Nov 1).

Stomper S, who resides in the same block, contributed photos and videos of the scene of the incident.

In the video, SCDF personnel can be seen rescuing the two men from the window ledge.

S told Stomp: "I was sleeping and suddenly woke up at about 4am.

"My unit is on a rather low floor so I could hear a lot of noise.

"I went to my kitchen, opened up one of the windows and saw a fire engine at the carpark.

"I also heard someone shouting for help.

"I panicked and the first thing I thought of was to wake my husband and son up so that we could evacuate.

"We all went downstairs and saw the fire. I heard some sounds that went 'pop', 'pop', 'pop'.

"We were just standing downstairs and a lot of people were talking.

"The firefighters were putting out the fire and my husband and I saw two men standing on the window ledge.

"We don't know the residents in that unit personally, but an aunty came up to me and said that she's the neighbour.

"She mentioned that she has complained to the town council about how there are so many cardboard boxes along the corridor and inside their house.

"The aunty also said that she has brought this up with her neighbour many times already but they didn't listen."

Stomper Sng also contributed a video of the fire and photos of the incident and its aftermath.

Large items can be seen along the corridor, outside the unit where the fire is raging. 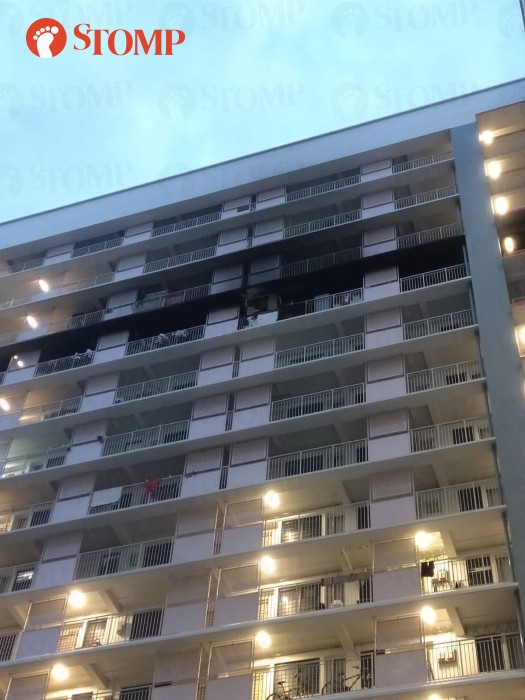 In a Facebook post, the Singapore Civil Defence Force (SCDF) said that they responded to the fire at 4.31am.

The fire involved contents of the residential unit and was extinguished by the SCDF with two water jets.

SCDF added the firefighters had to conduct forced entry so that they could access the burning unit.

A woman in her 60s was rescued from a toilet and two men were found standing on the ledge outside the kitchen's window.

SCDF said: "A vast accumulation of items in the kitchen limited the working space for the firefighters.

"This, coupled with the two men being highly exhausted, prevented the firefighters from pulling them safely into the unit.

"From within the unit, firefighters used ropes to secure the two men. Thereafter, rescuers from SCDF's elite Disaster Assistance and Rescue Team (DART) rapelled from the unit above and brought the two men into the CPL60's rescue cage.

"The men were brought down to the ground floor and were attended to by SCDF paramedics.

"The three casualties were conveyed to Singapore General Hospital for burn injuries and smoke inhalation.