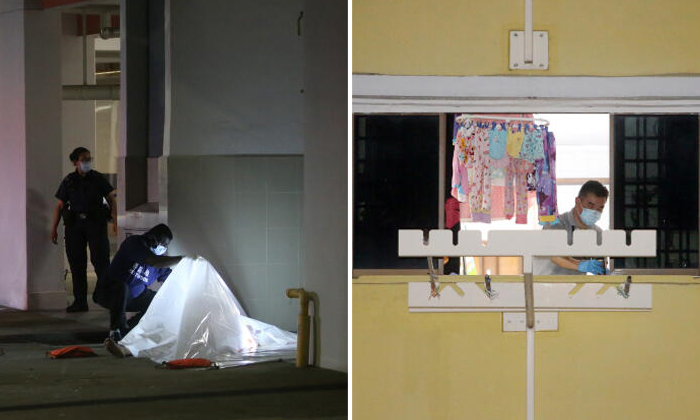 A 35-year-old woman and a five-week old baby were found dead at the foot of Block 81 Bedok North Road on Thursday (Oct 29).

The police told Stomp they were alerted to a case of unnatural death at 5.47pm.

"A 35-year-old woman and a five-week-old infant were found lying motionless at the foot of the block and were pronounced dead at scene by a paramedic," the police added.

According to Lianhe Zaobao, reporters saw two police tents at the foot of the block and blood on the ground. Police had also cordoned off the scene.

Mr Yang, an 18-year-old resident in the vicinity, said he was chatting with a friend at the void deck at around 5.30pm when they heard a loud noise.

He recounted: "We went to take a look, and saw a woman and a baby girl lying on the ground."

According to several other residents who declined to be named, the woman lived in a unit on the 10th floor with her husband and children.

Neighbours who were at the scene on Thursday suspected that the woman had postpartum depression, Lianhe Zaobao reported.

A man believed to be the woman's husband was seen crying near the police tents.

The couple have another four-year-old daughter.