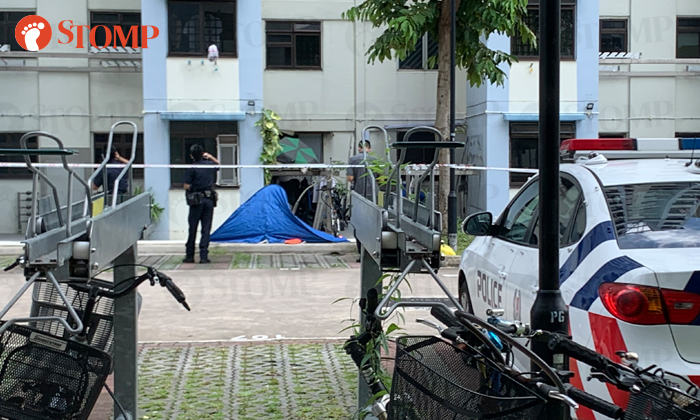 Two separate incidents - involving a woman who had threatened to jump from a block and a man who was found dead at the foot of another block - occurred in Toa Payoh on early Thursday morning (Sep 30).

Stomper Aloysius was walking along Lorong 1 Toa Payoh when he noticed a police car, a police tent and a few police officers at Block 100.

He submitted a photo of the scene which he took at around 11.40am.

In response to a Stomp query, the police said they were alerted to a case of unnatural death at Block 100 Lorong 1 Toa Payoh at 6.47am.

A 58-year-old man was found lying motionless at the foot of the block and was pronounced dead at scene by a paramedic.

The police had also received a call for assistance at 6.43am after a woman was spotted on the ledge outside the common corridor at Block 81A Toa Payoh Lorong 4.

According to Lianhe Zaobao, she threatened to jump from the 6th floor.

The 24-year-old woman was apprehended under the Mental Health (Care and Treatment) Act and subsequently taken to KK Women's and Children's Hospital.