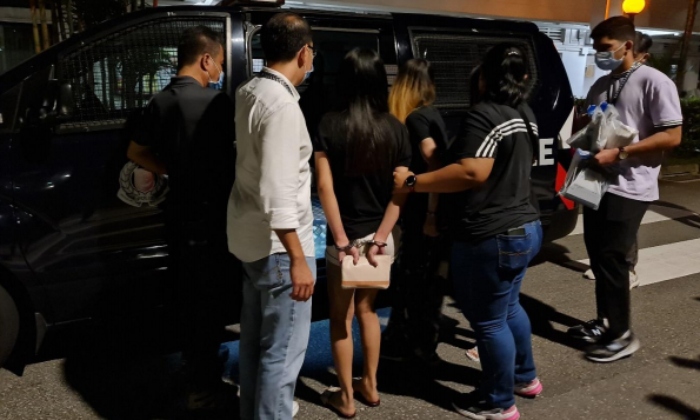 A five-day enforcement operation conducted by the Central Police Division resulted in the arrest of 23 men and eight women, aged between 24 and 76.

During the operation, the police arrested seven women, aged between 24 and 39, for their suspected involvement in vice-related activities.

"These women were believed to have advertised their sexual services online and carried out vice activities at private apartments and Housing and Development Board (HDB) residential units," said the police in a statement.

23 men and one woman, aged between 46 and 76, were also arrested for gambling-related offences.

Cash believed to be gambling proceeds amounting to about $8,300 were seized during the operation.

Property owners are advised by the police to ensure that tenants do not carry out vice activities in their premises.

Those who knowingly allow their premises to be used for vice-related activities will be prosecuted under the Women’s Charter and could be jailed for up to three years, fined up to $3000, or both.

Under the Betting Act, any person who acts as a bookmaker or for the purpose of book making or settling bets shall be liable on conviction to a fine between $20,000 and $200,000, and shall also be punished with imprisonment of up to five years.

Under the Remote Gambling Act, any person who provides unlawful remote gambling services for another shall be liable on conviction to a fine of not less than $20,000 and not more than $200,000 or to imprisonment for a term not exceeding five years or to both.

Under the Common Gaming Houses Act, any person who games in a common gaming house shall be guilty of an offence and shall be liable on conviction to a fine not exceeding $5,000 or to imprisonment for a term not exceeding six months or to both.

The police added in the statement that they will continue to clamp down on criminal activities.

"Those found engaging in such activities will be dealt with sternly in accordance with the law," said the police.