300 evacuated, 3 hospitalised after large fire at The Peak in Toa Payoh during wee hours 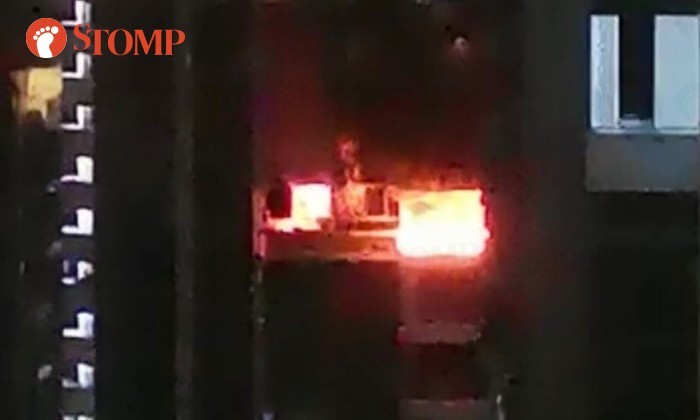 A total of 300 people were evacuated in the wee hours of Saturday morning (Aug 29), after a fire broke out at The Peak in Toa Payoh.

The Singapore Civil Defence Force was alerted to a fire at Block 138C Lorong 1A Toa Payoh at around 2.55am on Saturday, it said in a Facebook post on Saturday afternoon.

The fire at the Housing Board block involved the contents of a unit on the 20th floor and had also affected a unit directly above, on the 21st floor.

Three people from the unit on the 20th floor were taken to Singapore General Hospital with burn injuries and smoke inhalation. Those who were evacuated have since returned to their homes.

Upon arrival at The Peak, firefighters wearing breathing apparatus sets immediately proceeded to the burning unit and extinguished the fire.

They rescued two people who were found in a bathroom. Another occupant of the unit had evacuated prior to the SCDF's arrival.

Concurrently, firefighters forced entry into the unit on the floor above and extinguished the fire. Occupants of this unit had evacuated prior to SCDF's arrival.

Senior Minister of State for Foreign Affairs and Transport Chee Hong Tat expressed his appreciation in a Facebook post on Saturday, thanking residents who alerted their neighbours and called the SCDF when the fire broke out.

There was a big fire in one of the units at Blk 138C of The Peak around 3am last night. It spread to the upper units. ...

"Your quick response has helped to save lives and enabled affected residents to evacuate safely. I am heartened to learn about neighbours helping one another during this emergency. Thanks also to our SCDF firefighters for putting out the fire and keeping everyone safe," said Mr Chee, a Bishan-Toa Payoh GRC MP.

This incident is also a reminder of the importance of fire safety and evacuation procedures, and why common corridors and stair wells must be kept unblocked to ensure everyone's safety, Mr Chee added.

An eyewitness who lives at Block 139B and wants to only be known as Mrs Tan said: "Screams of 'fire' woke us up and we saw a unit in the opposite block engulfed in flames. All the neighbouring blocks in the estate chimed in and started yelling together to arouse the sleeping neighbours around the burning unit to evacuate."