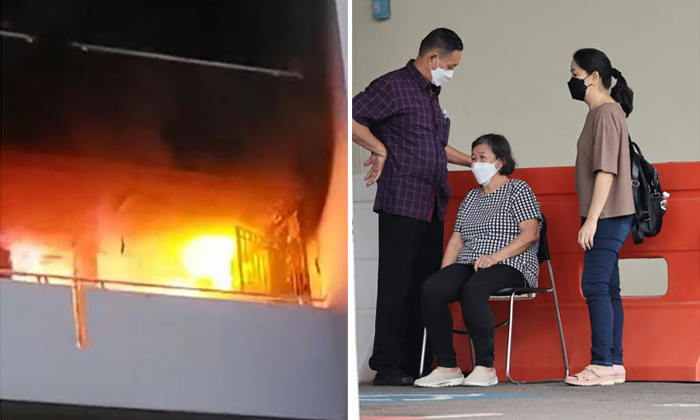 A three-year-old toddler had been in Singapore for only three days before she fell victim to a deadly Bedok North fire that claimed a total of three lives.

The blaze broke out in a fourth-floor unit at Block 409 Bedok North Avenue 2 on May 13, it was earlier reported. "A vast accumulation of combustible items" was found in the flat.

The three deceased victims have been identified as:

Mr Chen's 34-year-old wife is still in the intensive care unit (ICU) but her condition has stabilised, reported The Straits Times on Monday.

A classmate of Mr Chen told Shin Min Daily News on Thursday that he grew up together in the same kampung as the deceased. Both men also attended the same primary and secondary schools.

He said: "Shunqiang was easy-going, friendly and had a quiet personality. We are unable to accept that he's gone, it's too sudden."

He recalled being on good terms with Mr Chen during their school days and most fondly remembers the latter's love for comics.

According to the classmate, Mr Chen and his wife had a daughter. She lived in their hometown after being born and was taken care of by her grandparents.

The couple went back to their hometown for Mother's Day and subsequently decided to return to Singapore with their daughter.

Unfortunately, the family of three had only been back for three days when tragedy struck.

The classmate added: "I heard they brought their daughter out around Singapore to have fun. (I) never thought that an accident would happen in just three short days...

"I heard their bodies will be cremated in Singapore and the ashes will be brought back to Malaysia. When Shunqiang is back home and if there is a funeral, my classmates and I will go offer our condolences."