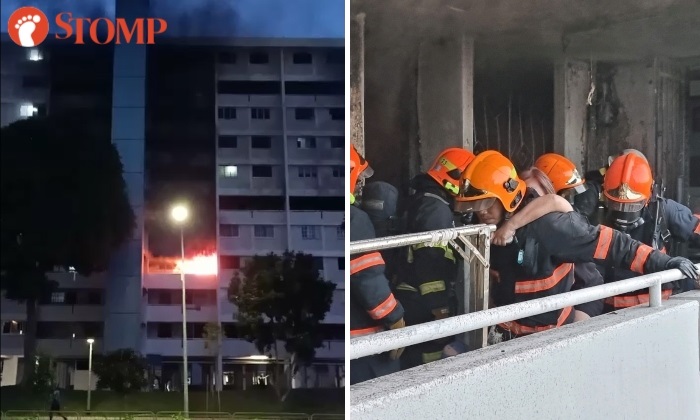 Three people, including a three-year-old, have died in a fire that broke out in the living room of a flat in Bedok North on early Friday morning (May 13).

When Singapore Civil Defence Force (SCDF) personnel arrived at the fourth floor flat at about 6.40am, they found four unconscious people in the unit which had a vast accumulation of combustible items, SCDF said in a Facebook post.

The toddler and his mother, 34, and a man, 35 - who live in the unit in Block 409 Bedok North Avenue 2 - were taken to hospital unconscious.

The man and the toddler died from their injuries at the hospital, the police said. The mother remains in critical condition.

Another occupant, a 56-year-old woman, was pronounced dead at the scene.

Speaking to reporters, MP for the estate Tan Kiat How said that five people lived in the affected unit, including a couple who rented out a room to three other tenants - a couple and a young toddler.

SCDF put out the fire in the living room with one water jet.

SCDF found the mother, toddler and the man in the bedroom while the 56-year-old woman was found in the living room.

That woman was pronounced dead at the scene by an SCDF paramedic.

Firefighters had to force their way into the cluttered bedroom to rescue the three people in it. SCDF personnel performed cardiopulmonary resuscitation on two of the victims. All three people were taken to Changi General Hospital.

Mr Tan said: "It's a very sad case. The family was really affected. The parents were protecting the toddler. I'm sure their last moments were a period of sadness and desperation. My heart is really torn.

"We want to make sure we take all steps to take care of the family and their loved ones."

SCDF officers also rescued three people in a next-door unit after forcing entry into the flat. Their injuries were minor and they did not want to be taken to hospital.

Sixty residents were evacuated from neighbouring units as a precautionary measure.

When The Straits Times arrived at about 8.35am, at least 10 policemen were seen at the foot of the block reassuring residents who had evacuated.

The block had been cordoned off and an SCDF ambulance was stationed nearby.

Mr Eric Seah, 50, who works in sales in the car industry, said that at 6.45am, his neighbour banged on his door shouting there was a fire.

Mr Seah, who lives alone on the sixth storey, said: “There was thick smoke. It was very pungent. Everyone was rushing down. The fire was quite big.”

He added that most residents evacuated by taking the stairs.

Mr Willie Toh Hock Beng, 45, a logistics driver who lives on the fourth storey next to the unit on fire, said he was woken up at 6.30am by his neighbours shouting about the fire.

Mr Toh, who lives with his wheelchair-bound mother, was grateful to his neighbours who helped them evacuate from the unit.

He said: “There was a man from the unit upstairs who came and quickly grabbed my mother, put her on his back and carried her down while I took her wheelchair.”

According to Mr Toh, a couple in their 40s or 50s live in the unit that was on fire.

He added that a young child lives in the same unit and they had a tenant as well.

He described the family as being very close, adding: “When they saw me, they would ask how my mum was.”

Another resident, Ms Jean Mah, 61, said she heard a loud explosion as she was evacuating her unit at around 6.30am.

Madam Lee Mei Mei, who lives on the fifth storey with her two siblings, said: “I knew there was something wrong this morning. I could see the smoke from my window. When I opened the main gate, a gust of smoke blew at me.”

The cleaner, 70, added: “I ran to the kitchen and got a big wet towel. We threw it at the base of the door to stop the smoke from coming in.”

“I rushed into my room to grab my bag. I didn’t even have time to change my shoes or wear my mask.”

When she and her siblings reached the ground floor, they saw the fourth storey unit ablaze.

Madam Lee said: “I was just stunned. I didn’t know it was so bad. It was so scary.”

At 11.30am, some contractors and representatives from the East Coast Town Council were seen at the affected unit doing repair work and clearing debris away.

Mr Tan said that efforts are underway to find accommodation for the remaining occupant who is well.

He added that the unit adjacent to the one that caught fire had two occupants - a woman and her foreign domestic helper. Mr Tan said the woman was related to the family in the other unit.

"The family members (were) held at a conference room at (the community hub) HeartBeat@ Bedok. Our community partners are seeing what else they need and what other support we can offer to them."

He said in a Facebook post: "Our grassroots leaders are helping families who have asked to temporarily evacuate. We have opened up the rooms at Heartbeat@Bedok to hold everyone.

"I thank residents for their cooperation and understanding.

"I am also grateful to @myscdf for their quick response. The agencies will look into the cause of this fire."

A retired fisherman, 71, had set fire to the third-storey, three-room flat he shared with his stepson, 48, and eight of the latter’s Indonesian friends who were staying with them.

The man, his stepson, and four of the friends died.