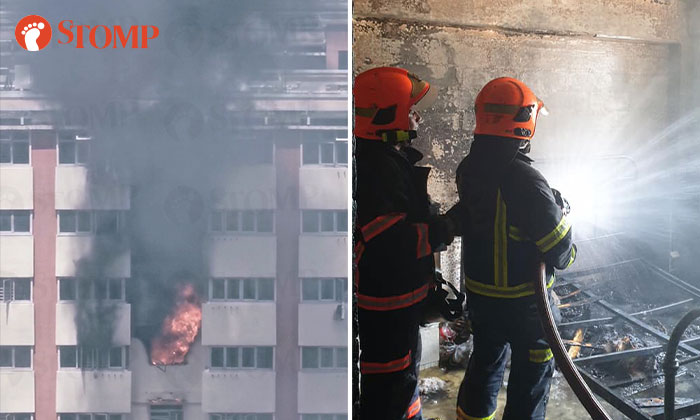 About 35 people were evacuated from Block 117 Jalan Bukit Merah after a fire broke out in a unit on the ninth floor on Tuesday morning (May 17).

Stomper Ronnie alerted Stomp to the incident and shared a video he took from his home a few blocks away.

"I saw a huge fire while I was at my apartment's service balcony at about 11.50am," he said.

"Firemen were already there and I could smell the smoke from here.

In a Facebook post on Tuesday at 3.36pm, the Singapore Civil Defence Force (SCDF) said it was alerted to the fire at 11.35am.

Posted by Singapore Civil Defence Force on Tuesday, May 17, 2022

"Upon the arrival of SCDF firefighters, thick black smoke could be seen emitting from a unit on the 9th floor," SCDF said.

"No one was in the unit.

"The fire which involved the contents of a bedroom was extinguished with one water jet.

"About 35 persons were evacuated from neighbouring units as a precautionary measure.

"Preliminary investigation into the cause of the fire indicates that it was due to electrical origin."