3 nabbed, drugs worth over $400k seized: Man tried to escape by scaling out of 17th-floor window 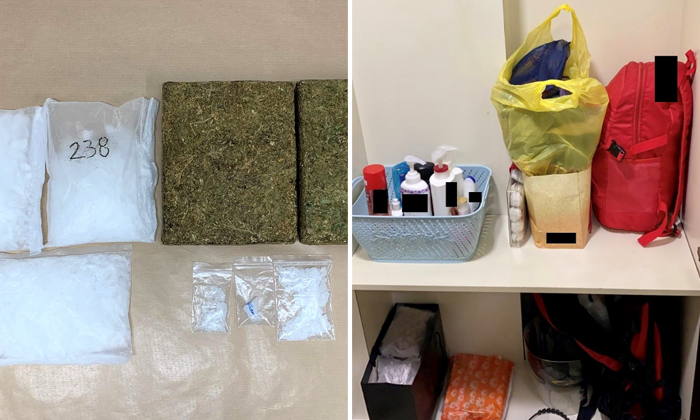 Three people have been arrested in connection with drug-related offences and a total of 3,720g of heroin, 813g of "Ice", 2,934g of cannabis and one Erimin-5 tablet were seized after an operation by the Central Narcotics Bureau (CNB) on Tuesday (Feb 16).

The first suspect, a 24-year-old Singaporean man, was arrested following a raid on a residential unit in Edgedale Plains in Punggol on Tuesday evening, a CNB statement said on Wednesday.

The man, who was the occupant of the unit, refused entry to CNB officers and tried to climb out the window on the 17th storey of the block.

CNB officers, who managed to pull him back into the unit, subsequently found six packets containing about 776g of "Ice" and two blocks of cannabis weighing a total of 1,914g.

The two other suspects - a 28-year-old Singaporean woman and a 32-year-old Malaysian man - were arrested in the vicinity of Balestier Road.

CNB said that investigations into the drug activities of all three suspects are ongoing. The total amount of drugs seized was sufficient to feed 1,770 heroin abusers, 460 "Ice" abusers and 420 cannabis abusers for a week.