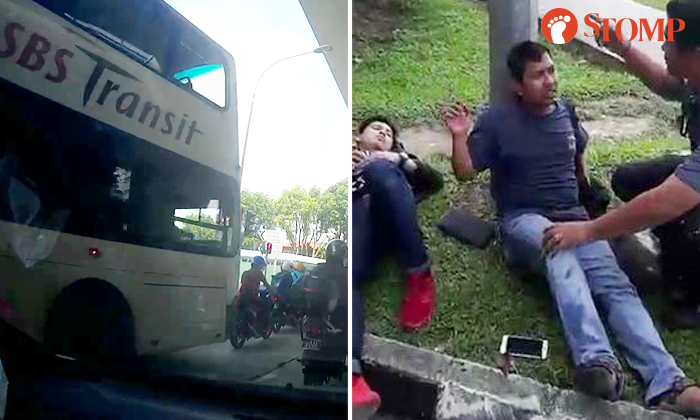 A new video of the accident involving a bus and multiple motorcycles, which occurred along Pasir Panjang Road on July 20, has surfaced online.

The bus captain has since been suspended, SBS Transit told Stomp in a statement.

It was earlier reported that the incident took place at close to 11am and left three men injured. They are aged between 23 and 39, according to the police.

Stomper Edros had shared with Stomp a video that was taken at the scene, showing the aftermath of the collision.

Facebook page Beh Chia Lor - Singapore Road has now uploaded a second video of the accident itself and tagged Stomp in its post.

In the clip, the bus can be seen moving off and running over four motorcycles in its path while the traffic light was still red.

The video has sparked numerous comments from netizens, who are speculating over what caused the bus driver's actions.

"Our priority is the well-being of the two injured motorcyclists and a pillion rider.

"We were at the hospital that day following the incident and all three of them received outpatient treatment. We will continue to render assistance to them as best we can.

"We apologise to affected commuters and road users for the distress caused.

"Meanwhile, we are assisting the police with their investigations and the Bus Captain has been suspended pending findings."

Related Stories
3 men injured, bike pinned under bus after accident in Pasir Panjang
Bus driver injured after accident along YCK Road: He ended on wrong side of road due to dizziness
Biker pinned underneath bus in accident at Toa Payoh Lor 6
More About:
accident
injured
bike
Bus
motorcycle
shocking