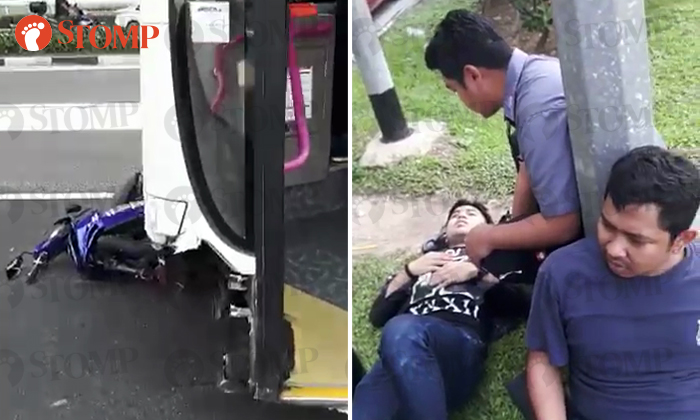 A new video shows the bus driver ramming into four motorcycles, while the traffic light was still red.

An accident involving one bus and multiple motorcycles occurred along Pasir Panjang Road this morning (July 20).

The Singapore Civil Defence Force (SCDF) said they were alerted to the accident at around 11am and conveyed three men to the National University Hospital (NUH).

Stomper Edros shared with Stomp a video that was taken at the scene, which he said is circulating online.

In the video, a motorcycle can be seen pinned underneath a bus which had its front bumper damaged. The bus was stationary, though its driver was still in his seat.

Nearby, a group of onlookers had gathered around a man who was lying on the road and rendering their assistance to him.

Even further down the road were two other men who appeared to have been involved in the accident.

One of the men was conscious and lying on the grass patch with a helmet beside him, while the other was sitting against a metal pole.