Biker pinned underneath bus in accident at Toa Payoh Lor 6 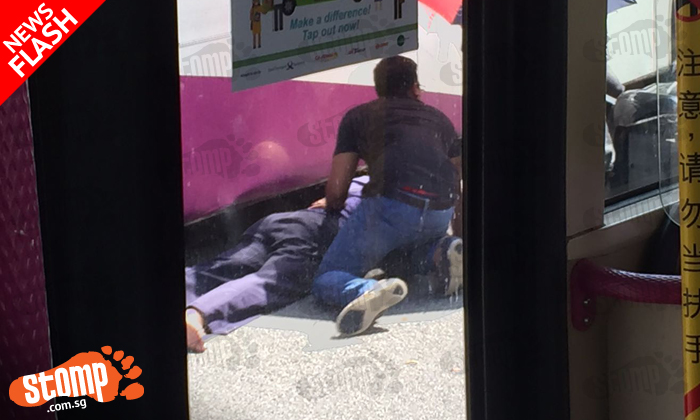 A male motorcyclist was left pinned underneath a bus after an accident at Toa Payoh Lorong 6 today (Mar 21) at around 11am.

Stomper Bob had come across the scene while he was on another bus, and contributed photos to Stomp.

In the pictures, three onlookers can be seen rendering their assistance while waiting for authorities to arrive.

One man tended to the victim while another provided shelter with an umbrella.

A motorcycle can also be seen lying on its side nearby.

In response to media queries, a Police spokesperson told Stomp:

"On 21 March 2017 at 10.56am, the Police were alerted to an accident involving a bus and a motorcycle at the junction of Lorong 6 Toa Payoh and Lorong 4 Toa Payoh.

"A male motorcyclist was conscious when he was conveyed to Tan Tock Seng Hospital.

Related Stories
'Cardboard uncle' knocked down by taxi: 'Where is my trolley? I have 2 packets of biscuits inside'
Cabby in ICU and 4 others injured after accident involving taxi and bus at Woodlands
accident
injured
Bus
biker
motorcycle
motorcyclist