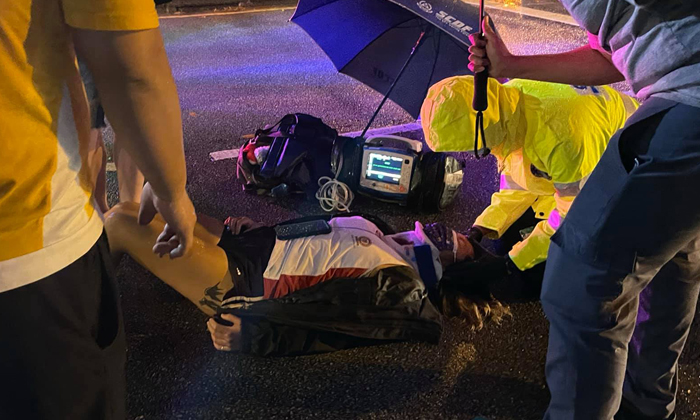 A 23-year-old woman was taken to hospital after getting hit by a car at a zebra crossing in Jurong West on the rainy morning of January 10.

Responding to Stomp queries, the police said they were alerted to the accident involving a car and a pedestrian along Jurong West Street 65 at 6.47am.

The pedestrian was conscious when taken to Ng Teng Fong General Hospital.

Facebook user Linda Lim identified the victim as her youngest daughter and shared photos of the accident scene.

Paramedics can be seen attending to the injured woman, who is then lifted onto a stretcher.

According to Lim, the accident occurred at the zebra crossing in front of Block 671B Jurong West Street 65 at around 5.45am

"The driver said he didn’t see her as the opposite direction's vehicle lights were very glaring."

Lim is appealing for witnesses or anyone with video footage of the accident to contact her.

She also cautioned road users about the two zebra crossings in Jurong West Street 65, as it is "very dark especially in the night or during a heavy downpour," and reminded everyone to make sure that vehicles have stopped before crossing the road.