Pedestrian, 54, taken to hospital after accident with bus at Bedok junction 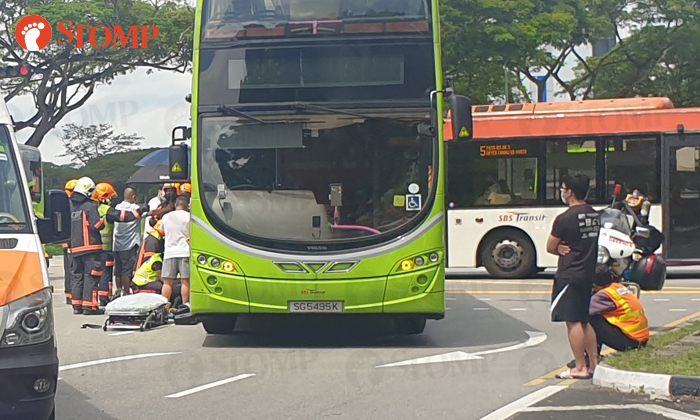 A 54-year-old woman was taken to hospital after an accident with a bus at the junction of Bedok Reservoir Road and Bedok North Road on Monday afternoon (Dec 7).

The police and the Singapore Civil Defence Force (SCDF) told Stomp that they were alerted to the accident at 12.55pm.

The female pedestrian was conscious when taken to Changi General Hospital.

Stomper Wenn, a resident at the Archipelago condominium located opposite the accident scene, shared photos showing paramedics next to an SBS Transit bus.

A bus driver in SBS Transit's uniform can be seen sitting on a kerb nearby.

Wenn said: "An auntie was crossing the road when the bus hit her.

"I was on my balcony when I noticed that a bus had suddenly stopped at the traffic junction and caused a jam.

"After a while, an ambulance and two fire engines arrived at the scene. The auntie was inside the ambulance 15 minutes later.

"When I went to the scene, the bus captain was assisting the Traffic Police."

In response to a Stomp query, Ms Tammy Tan, senior vice president of corporate communications at SBS Transit, said: "Our immediate focus is on the pedestrian's well-being and we are in touch with her next-of-kin.

"We are sorry that this has happened and are committed to rendering our assistance as she recovers. Meanwhile, we are assisting the police in their investigations.

"We would also like to apologise to affected commuters and motorists who were inconvenienced earlier this afternoon due to the accident."