Crest Secondary School student, 15, dies after getting hit by car while crossing road in Queensway 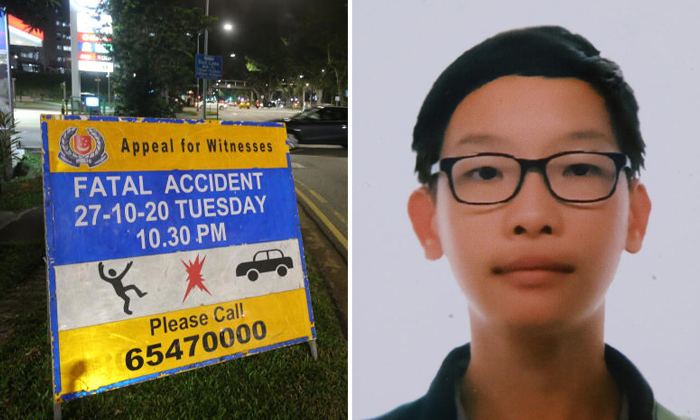 A 15-year-old teenager died from his injuries after getting hit by a car while crossing the road in Queensway on October 27.

In response to a Stomp query, the police said they were alerted to the accident, which occurred in the direction of Jalan Bukit Merah, at 8.30pm.

The pedestrian was unconscious when taken to National University Hospital, where he subsequently succumbed to his injuries.

A 54-year-old driver has been arrested for careless driving causing grievous hurt and police investigations are ongoing.

According to Lianhe Wanbao, Crest Secondary School student Huang Junyong had been crossing the road when he was hit by a car and sent flying.

A worker in the vicinity said he saw the victim lying on the road and bleeding from his head.

The driver parked by the roadside and called the police.

Two women who were passing by also went forward to help and called the ambulance.

"They kept shouting at him to wake up and told the boy not to close his eyes, but he was already unresponsive," recounted the worker.

Huang's mother, Ms Chen, said she came from Perak, Malaysia, to work in Singapore 20 years ago. The 40-year-old cashier is a single mother who had raised her two sons alone.

She lives in a two-room flat at Commonwealth Crescent with her two sons and her mother.

Choking up, Ms Chen said that while the family was not financially well-off, she saw the well-being of her family as good fortune and found it hard to accept her younger son's accident.

She added: "He usually comes home on time after school and I never have to worry about him. On the day of the incident, he said he was going to the coffee shop to buy food."

The family subsequently went to bed and were unaware that Huang did not return home.

They were only informed of the accident when the police showed up at their home at 2am. They then rushed over to the hospital.

"I went to the ward first and saw six to eight doctors. They said they had tried to resuscitate my brother for two hours. Seeing so many tubes inserted into his body, I did not want him to suffer and told him to leave peacefully.

Ms Chen was unable to accept her son's passing and repeatedly shouted at him to "get up".

At her older son's persuasion, she closed Huang's eyes and told him to go in peace.

Ms Chen also hit back at speculation that Huang had been using his mobile phone while crossing the road. She clarified that he had only brought money out but left his phone and Identification Card at home.

Ms Chen, who is appealing for eyewitnesses, wishes to get in touch with those who had tried to help her son at the accident scene.

She said: "We would like to know how he was at that point in time and if he left any last words."

She also hopes that the driver can apologise or provide an explanation.

She told Wanbao: "It has been a week. The driver did not attend the wake or even call. We just want him to apologise."

Ms Chen added that it was her younger's son dream to travel to Japan, but that can no longer be fulfilled.