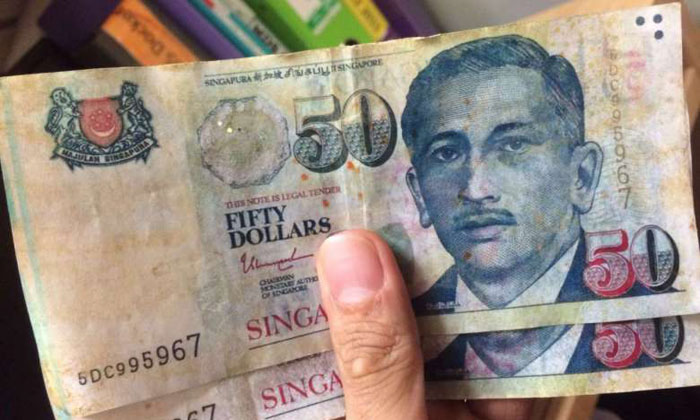 A 21-year-old man was arrested for his suspected involvement in two separate cases of using $50 counterfeit notes at Choa Chu Kang on Feb 10 and 11.

The police said in a statement that they received a report on Feb 12 at about 1.50pm that two $50 counterfeit notes were presented for payment at a convenience store at Choa Chu Kang Street 51 on Feb 10.

The notes were seized as case exhibits.

Officers from the Commercial Affairs Department established the suspect's identity and arrested him along Choa Chu Kang Street 51 on Feb 12 at about 5pm.

A printer, laptop and several pieces of $50 and $100 notes were seized.

The notes are believed to be photocopied reproductions as they lack security features such as the watermark found on genuine notes.

"The simulated security features such as the kinegram and security-thread are also distinctively different from those on genuine notes," said the police.

"The surface of the counterfeit notes also lack the embossed feel on genuine notes."

Investigations revealed that the man is believed to be involved in a similar case on Feb 11.

If convicted, he may face up to 20 years' jail and a fine.

If you suspect that you have received a counterfeit currency note, please adopt the following measures:-

Information on the security features of genuine Singapore currency is available on the MAS website.