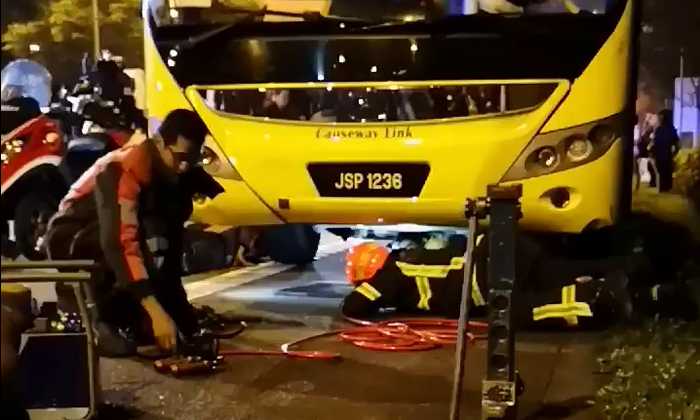 A chain collision involving five vehicles on the Pan-Island Expressway (PIE) on Wednesday night (Dec 12) left one dead and one injured.

Responding to a Stomp query, the police said they were alerted to an accident involving two cars, a bus, a motorcycle and a lorry at 10.07pm.

The accident occurred in the direction of Tuas, before the Bukit Timah Expressway (BKE).

A police spokesman added: "The motorcyclist, a 22-year-old man, was conscious when conveyed to National University Hospital."

His pillion rider, a 20-year-old woman, was unconscious when taken to the same hospital where she subsequently succumbed to her injuries.

Stomp understands that she had been pinned under the Malaysia-registered Causeway Link bus.

The two cars and the lorry were travelling in front of the motorcycle, while the bus was behind it.

The driver of the first car is believed to have applied her emergency brakes, which sparked the chain collision.

The motorcycle then crashed into the rear of the lorry, causing the motorcyclist and his pillion rider to fall off the bike and into the path of the bus.

Facebook user Laina Lum had posted photos and a video taken at the scene, where rescue operations were underway.