Motorcyclist dies after getting trapped under lorry at Sungei Kadut Avenue, cabby arrested and sacked 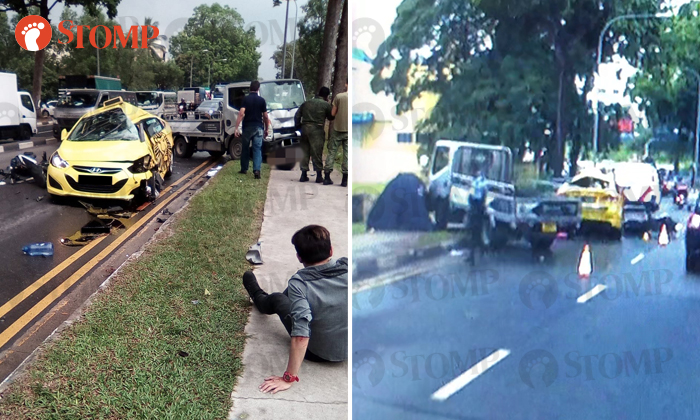 A 57-year-old man was killed in an accident involving his motorcycle, a taxi and a lorry along Sungei Kadut Avenue towards Woodlands Road on Wednesday afternoon (Sep 19).

Police, who were alerted to the accident at 3.53pm, told Stomp that the motorcyclist was pronounced dead by paramedics at the scene.

The 28-year-old lorry driver and 33-year-old taxi driver were both conscious when conveyed to Khoo Teck Puat Hospital.

The taxi driver was subsequently arrested in relation to the case.

In response to a Stomp query, the Singapore Civil Defence Force (SCDF) said it was alerted to the incident at about 4pm.

SCDF found the motorcyclist trapped under the front left tyre of the lorry and extricated him using rescue tools, but paramedics subsequently pronounced him dead.

Stomper Kelvin sent to Stomp a video that showed a death tent at the accident scene.

Kelvin said: "This was captured on my in-car camera yesterday at around 6pm after I knocked off from work."

Stomp understands that the lorry had been travelling on the left lane along Sungei Kadut Avenue towards Woodlands Road, while the motorcycle was on the second lane.

The taxi was travelling from the opposite direction when its driver lost control.

It mounted a kerb and collided into the motorcycle, then crashed into the lorry.

Responding to Stomp's queries, ComfortDelGro's group corporate communications officer Tammy Tan said: "We are deeply sorry that this has happened. Our priority is to reach out to the next of kin of the deceased as well as to the injured lorry driver.

"We are also assisting the police in their investigations. The hiring agreement with the driver in question has been terminated with immediate effect."