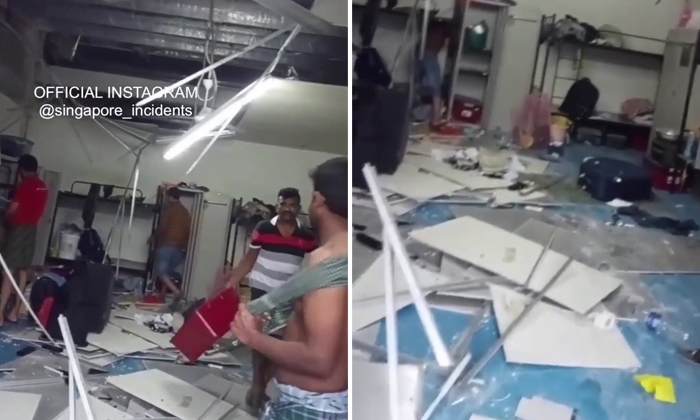 A false ceiling at a migrant worker dormitory in Woodlands collapsed on Sunday, resulting in two residents sustaining minor injuries.

In video footage that is being widely shared on social media, the floor of a dorm room can be seen covered with pieces of the collapsed ceiling.

Parts of the ceiling – still half detached – can be seen dangling from ceiling beams.

Workers are seen packing their things and stepping over the rubble to leave the room.

In response to queries, the Ministry of Manpower (MOM) on Monday night said it is investigating the collapse of the false ceiling in seven rooms at North Coast Lodge Dormitory, which it said was due to heavy rain and strong wind.

Forward Assurance and Support Team officers from MOM, the police and the Singapore Armed Forces have been deployed to the dorm, it added.

MOM is working with the dorm operator to support affected residents, it said.

The two injured residents have been treated for minor cuts.

The Straits Times has contacted the dorm operator and the Migrant Workers’ Centre for comment.