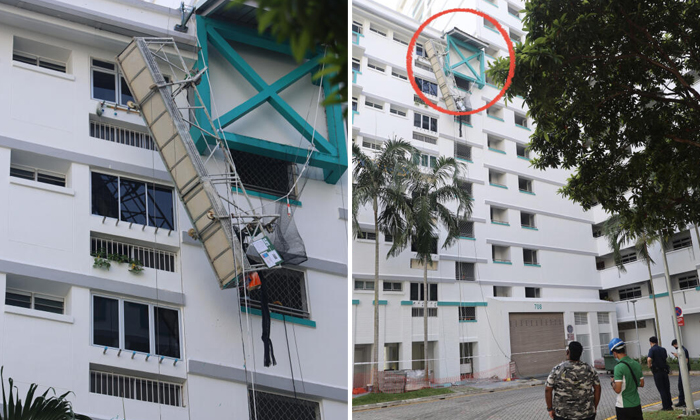 Two workers were taken to hospital on Wednesday (March 23) after a gondola they were on malfunctioned and tilted to one side.

The Singapore Civil Defence Force said they received a call for help at 9.25am, at Blk 708 Pasir Ris Drive 10.

Chinese evening newspaper Shin Min Daily News reported that the two workers did not appear to have suffered any injuries, but were taken to Sengkang General Hospital for check-ups.

The paper, citing a town council spokesman, said the workers were installing anti-bird netting on the seventh floor of the block.

Witnesses told Shin Min that they heard a loud sound, and saw the gondola swinging in midair and tilted to its right side. The items on it, such as a paint bucket, had slid off.

The two workers, who appeared stunned, managed to climb off the gondola onto an adjacent stairwell.

The town council spokesman said the gondola was installed on Tuesday. It will report the incident to the Manpower Ministry for investigations.