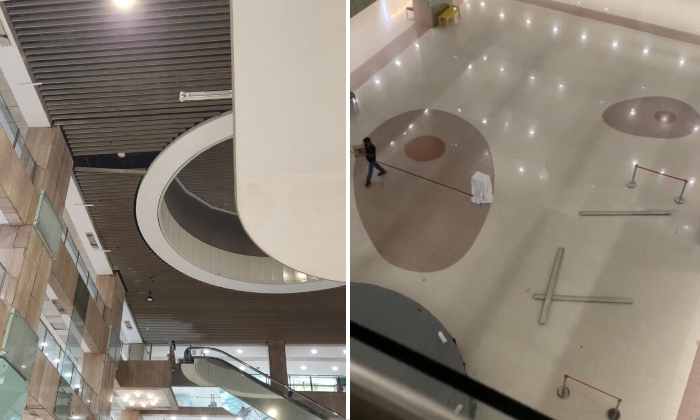 A woman in Far East Plaza had a narrow escape when three long wooden beams broke from the high ceiling and landed on the second-floor concourse on Wednesday morning (Aug 10).

She was sitting on a red bench at the edge of the concourse when the grey beams crashed onto the floor mere metres from her.

An employee of a tailor shop next to the concourse said he rushed out when he heard a loud crash and saw the woman hurrying away.

She was the only person in the concourse when the incident occurred around 9.45am, said the employee who wanted to be known only as Mr Eric.

"Luckily, the incident happened early in the morning. If there had been more footfall, someone could have got badly hurt," he said, adding that most shops in the Orchard mall open after 10am.

In response to queries from The Straits Times, the Far East Plaza management said the incident happened when a technician was about to lower the high bay lights from the ceiling to replace a faulty lamp.

He inadvertently reversed the direction of the winch, or lifting device, which caused the light fitting to move towards the ceiling trellis.

"The impact caused three pieces of trellis to dislodge and fall from level five to level two. A lady was at the concourse at the time. Fortunately, nobody was injured," the mall's management said in its e-mail reply, adding that the concourse was immediately cordoned off.

The mall's contractor is expected to carry out repairs on the trellis after the mall closed on Wednesday evening. The concourse will reopen after a thorough inspection, said Far East Plaza's management.

When ST visited the strata mall at 3.30pm, the concourse had been fenced off with barriers circling the red bench.

There was a gap in the level five ceiling above the bench, and one beam seemed to be hanging after being partially dislodged.

The normally quiet morning of retailers and workers - especially those from cafes and coffee shops that had opened before 9am - was jolted by the loud sound of the beams hitting the ground.

A number of people from the third to fifth storeys rushed out of their shops to check the commotion, said Mr Eric.

A worker, known only as Mr Lim, at Isle Cafe coffee shop next to the concourse said he saw some mall employees rush to clear the debris and fence off the area.

Mr Eric said this is the second incident in Far East Plaza recently. On July 10, two glass panels fell to the floor below after a shopper kicked them. No one was injured.

"The area was cordoned off and the glass shards were swept away," he said.

One of Singapore's oldest shopping complexes, Far East Plaza was opened in 1982.

Related Stories
Parts of ceiling at NEX shopping mall fall due to water leakage, tenants made to stop operations
Driver at a loss after Volkswagen gets damaged by spalling concrete at Tekka Centre carpark
Part of false ceiling falls from building in NTU, no injuries reported
More About:
Ceiling
Far East Plaza
shopping centre
close shave