2 found dead in Singapore River: Man slipped and fell into water, friend jumped in to save him 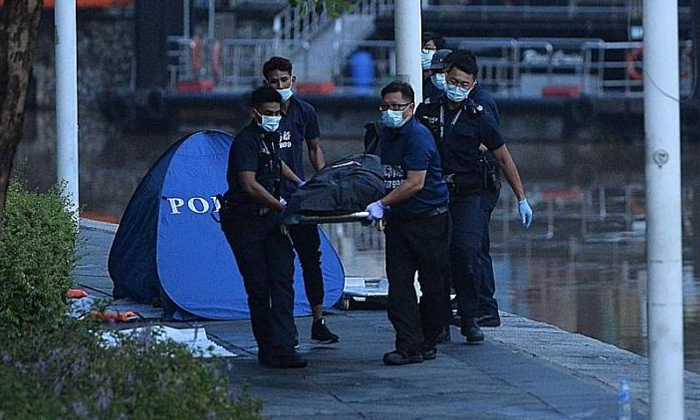 Tragedy struck during a night out by a group of friends when two of them died in the Singapore River in the early hours of yesterday.

One of them, a 28-year-old man, had apparently slipped and fallen into the river, prompting his friend, 26, to jump in to try to save him.

But both men soon vanished into the dark waters of the river.

The police said yesterday they were alerted to a case of suspected drowning in the Singapore River near 6 Eu Tong Sen Street - the address of Clarke Quay Central - at 1.57am.

A spokesman for the Singapore Civil Defence Force (SCDF) said it received a call for water rescue at about 2am. When its officers arrived at the scene, there was no sign of the two men.

Divers from SCDF's Disaster Assistance and Rescue Team were then deployed for an underwater search. An underwater remotely operated vehicle (ROV) also joined the search effort.

"The ROV allows underwater search operations to be conducted using sonar-imaging equipment that maps out underwater terrain," said the spokesman.

"This reduces risks for the divers due to poor visibility underwater and also reduces search time."

The divers found and retrieved the body of one man at about 4am and the second body at 5.45am. They were pronounced dead at the scene by an SCDF paramedic.

A self-employed man, Mr Mohamed Halib, 34, told Chinese-language newspaper Shin Min Daily News that a friend of the victims told him the group had been drinking alcohol earlier at a nearby bar before moving to the steps on the bank of the river to chat.

It was there that the older man was believed to have lost his footing and fallen into the water.

A man from the group told Shin Min the group was about to head home when he heard a loud sound. He turned around and realised one of them had fallen into the water and the other had jumped in after him.

"Upon seeing this, (a third) friend jumped in to save them. But by then, both of them had vanished," said the man.

Their friends then called the police and SCDF.

Recalling the tragedy, another friend choked up as he told Shin Min: "I didn't expect that in just a minute, the two of them would just disappear right in front of me."

Shin Min reported that both victims were Malaysians who had arrived recently from Johor Baru to work in Singapore.

A man who said he was the older victim's childhood friend told Shin Min: "He found a new job recently and was supposed to start work next week.

"His new workplace is close to my home, and he decided to move in with me. How could something like this happen?"

Based on their preliminary investigations, the police said they do not suspect foul play. Investigations are ongoing.

A full-time national serviceman, who wanted to be known only as Mr J. Lah, 20, said he was cycling with friends in the area when he saw about seven police cars and three SCDF vehicles parked near the Singapore River.

He told The New Paper: "When I stopped my bike, I saw two divers head into the water to search for the men."

He said the victims' friends looked distressed as they gathered at the riverbank.

By the time Mr Lah left at 2.30am, a crowd of more than 30 people had gathered at the scene.

Mr Isaac Lim, dean of the Academy of Water Safety and Swimming, said it is not advisable to jump in to rescue someone who had fallen into a waterway.

"If your friend or family member falls into unfamiliar waters, especially where there are strong currents, you should throw them a lifebuoy or anything that can float. Then you should immediately call for help," he said.

Mr Lim warned that a person struggling in the water is likely to panic and drag an untrained rescuer down with him.

"So even if you are a strong swimmer, it is extremely risky to try to save a drowning person."