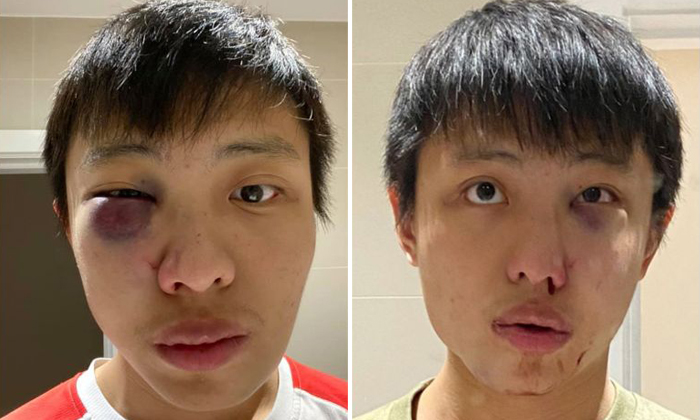 A 15-year-old boy has been charged by the London Metropolitan Police for his alleged involvement in a racially aggravated assault on Singaporean student Jonathan Mok in London.

A police spokesman said the boy was charged with wounding or inflicting grievous bodily harm without intent and will appear at Highbury Corner Magistrates' Court on Aug 10.

The police added that a 16-year-old boy who was arrested on March 4 in connection with the case has been released with no further action taken against him.

On March 3, Mr Mok, 23, opened up on Facebook about the attack, which took place in Oxford Street near the London Underground's Tottenham Court Road train station.

The University College London law student said he heard a group of young people say "coronavirus" as he walked past them at about 9.15pm on Feb 24.

When he turned to face the group, he was punched in the face, with one of the suspects saying "I don't want your coronavirus in my country" before the group fled.

On March 4, the Singapore High Commission in London said on Facebook that it was "deeply disturbed" by the attack and recognised its "broader implications" given the large Singaporean community in Britain.

It also promised to ensure that the London Metropolitan Police "follow through with their investigation with the utmost priority".

"(We) do not believe that the assault reflects the majority view of the British people in particular towards Singapore, given the close and special relationship between the UK and Singapore," the High Commission added.

British High Commissioner in Singapore Kara Owen said in a tweet on March 3 that she was "shocked and saddened by the attack" and wished Mr Mok a speedy recovery.

Mr Mok said in his Facebook post: "Why should anyone, simply because of the colour of their skin, be subjected to abuse, in any form, verbal or physical? Why should I keep quiet when someone makes a racist remark towards me?

"Racism is not stupidity - racism is hate. Racists constantly find excuses to expound their hatred - and in this current backdrop of the coronavirus, they've found yet another excuse."