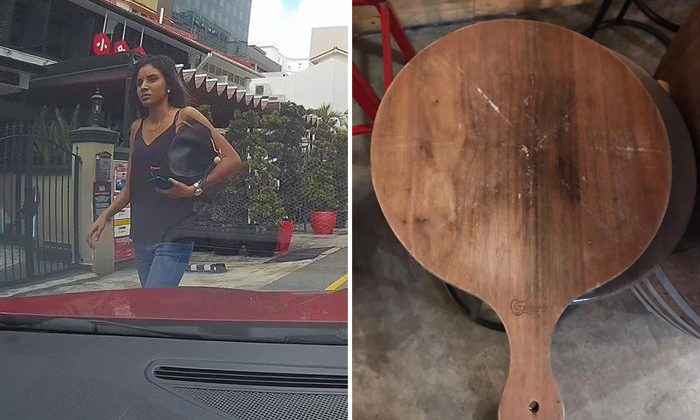 A 20-year-old Singaporean woman was arrested for her suspected involvement in a case of rash act causing hurt, the police said on Thursday (July 16).

On Wednesday (July 15) at 11.50am, the police received a report from a 71-year-old man who had allegedly been assaulted by an unknown woman with a wooden serving pan after she had alighted from his taxi in Prinsep Street.

The woman was also allegedly not wearing her mask while on the taxi and had refused to pay her taxi fare before leaving the cab.

She was subsequently identified and arrested by police officers from the Central Police Division on Thursday at 3.20pm in Kitchener Road.

The police believe that the woman was also involved in prior cases of fare evasion, which the Land Transport Authority and the Public Transport Council will be looking into.

The woman will also be investigated for breaching safe distancing measures under the Covid-19 (Temporary Measures) (Control Order) Regulations 2020 by not wearing a mask.

In a Facebook post on Wednesday, user Kelvin Chua, who is presumably the victim's son, took to social media and asked netizens to help identify the woman who had allegedly attacked his father.

He mentioned in his post that the woman had asked for his father's mobile phone to make numerous calls throughout the 17-minute taxi journey and had refused to return the phone even after repeated requests from his father.

After the woman had alighted from the taxi without paying for her fare, the victim "followed (her) from a distance" and she allegedly attacked him with a "pizza board".

For the offence of a rash act causing hurt, the woman could be jailed for up to one year, fined up to $5,000, or both.

Repeat offenders could face a fine of up to $2,000 or jailed for up to six months, or both.

Related Stories
Lowballer bargains with 64-year-old cabby over $7.60 fare because 'I'm old and not much money'
Cabby taken to hospital after allegedly getting punched and choked by passenger in attempted robbery
Man jailed for cutting cabby with flip knife at Orchard Towers
More About:
assault
attack
elderly
cabby
taxi
evade
evade fare
arrest